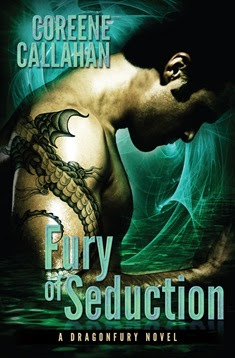 Successful landscape designer Tania Solares prides herself on living by her own terms, relying on no man to provide for her. But her carefully controlled life takes a turn for the extraordinary when her inquiry into the disappearance of her best friend thrusts her between two warring factions of dragon-shifters. Suddenly Tania’s survival depends on Mac, a newly initiated dragon-warrior who will break every rule to keep her safe.

Now that Tania knows the truth about Dragonkind, returning to her old life is too grave a risk. Ivar, leader of the Razorbacks, plots to decimate the human race, and Tania is just the tool he needs. Despite the danger, Mac cannot deny her a choice: Trade the independence she’s fought so hard to achieve for safety in a magical world, or turn her back on the man she’s grown to love in order to reclaim a freedom that might not last? It is an impossible choice. And yet a sacrifice must be made…

Review:
Have you ever come across a series that has all the elements it needs to make it a favourite but somehow it never quite hits the mark? That's kind of how I'm feeling about the Dragonfury books right now. These books have so much potential but each book leaves me feeling like I'm missing out on something. I was willing to forgive the similarities between this series and the Black Dagger Brotherhood and Midnight Breed series during the first book, I even forgave them in the second book but I keep hoping that the author will branch out and start adding her own unique voice to the world she is creating and it hasn't happened yet. Yet again this book is full of similarities to the BDB & MB series and it didn't even stand out as particularly different from the previous books. It seems like the author has found a formula she likes and is determined to stick with it and I'm getting to the point where I'm not sure if I should continue reading.

What I did like about this instalment is that we are starting to find out more about the Dragonkind race as a whole but we now have so many different enemies and plot lines going on that it took away from the romance between Mac and Tania. I really would have liked at least one of the sidelines to be resolved but I've just been left with a load of questions. I'm thinking that it would be helpful for them to start finding their high energy mates from a different area though - surely if they're trying to stay under the radar the number of disappearances (not to mention the fact that all of the women can be linked to each other!) is just going to raise suspicion. Another thing that really bothered me was the way the points of view would change mid-scene, I know this is a trick often used to raise tension but there are good and bad ways of doing this. At one point Mac and Tania are finally about to get down to business and halfway through the deed the point of view jumps to one of the bad guys and we get to see him attend an orgy. Is it any wonder I don't feel invested in Mac and Tania's relationship?

I really liked Mac in the earlier books, if you put the fact that he was a no nonsense cop who suddenly discovers he is half dragon while investigating a woman's disappearance (remind anyone of Butch from the BDB?) to one side and you have a nice guy who is learning how to fit into a world that is very different to the one he thought he knew. He is struggling to learn to control his dragon abilities, something that isn't helped by the fact that he is the only water dragon and the others have no idea what he should be capable of, but he really comes into his own when Tania is in trouble. I have to admit that while his methods of protecting her worked they also succeeded in scaring the living daylights out of her - if Mac had done the same to me I'd never have forgiven him because it would have taken me months to get over the trauma! I did enjoy seeing what he was capable of though and I'm curious to see what other dragon abilities are going to pop up as the series continues. I'm afraid I didn't end up being a huge fan of Tania though, she obviously cares a lot about her sister but I never really felt like I got to know her as a person and I couldn't really see why Mac felt they were so perfect for each other. I hate to use the term "too stupid to live" and it's something that you'll hardly ever find in any of my reviews but in this case it fits Tania perfectly. I could have forgiven her for putting herself and everyone else at risk to run to her sister if she hadn't immediately forgotten all about her sister the minute Mac had rescued her from the situation she ended up in.

I've made a lot of complaints about this book but it wasn't all bad, I still think the whole series has a lot of potential and I'm really, really hoping that the next book lives up to that. Each book so far has been a relatively quick and pleasant read even if it wasn't completely original. I like the camaraderie between the Nightfury warriors and I do want to see more of them find their mates (I'm particularly interested in Forge and Venom after this book), I'm even curious to see how they are going to stop Ivar. My favourite book so far was definitely the second one, Fury of Ice, so I'm hoping that the next book gets back to that standard. One thing I will say for Coreene Callahan is that she can write a good action scene, especially the aerial battles where the Nightfuries are fighting the Razorbacks which she makes incredibly easy to picture.