Review: Demon at my Door - Michelle A. Valentine 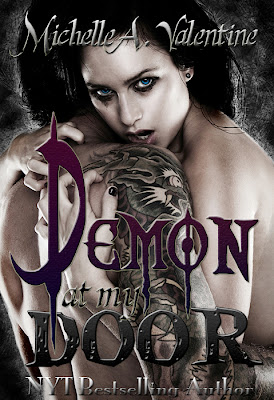 Gothic outcast Natalie Sugarman bartered her soul for her dying mother’s life sixteen years ago to a boy demon that could stop time. Now, days before her twenty-first birthday, the lifelines on her palms are slowly vanishing, and she knows it’s just a matter of time before Satan’s little helper collects.

Natalie's tried numerous times to kill the demon and regain control of her soul’s destiny, but she always falls short. When she decides to try and gain the element of surprise for her next attempt, Natalie seeks answers about his location from a freaky, glowing-eyed fortuneteller. Creeped out by the psychic’s methods, she bolts from the reading and misses the warning that the demon who stole her soul is always closer than she thinks.

After some strange incidents with her new boyfriend, including a hot, levitating sex session, she realizes he’s the grown-up version of her little nightmare and he’s returned to collect on their deal. Natalie must figure out how to win her soul back from the demon before her lifeline completely disappears and she becomes his forever—even if that means making a deal to damn three other souls to take her place.

Review:
Natalie was five years old when she sold her soul to a demon in order to save her mother's life, she didn't understand what she was really giving up but that isn't going to stop the demon from collecting his payment when she reaches her 21st birthday. Ever since she told people about the demon she has been treated as a crazy outcast by her family and by people at school. Her friends turned their backs on her and now she lives a very lonely life. Over the summer she has been dating her ex-friend and neighbour Stew but now they are back at college he is refusing to publicly acknowledge their relationship and Natalie feels more alone than ever. That is until new boy Rick comes onto the scene and takes an immediate interest in her completley ignoring the warnings to stay away from the crazy girl. She grows closer to Rick but her birthday is fast approaching and she has very little time left. Natalie is desperate to find a way to win back her soul but will the demon be prepared to make a new bargain?

I really enjoyed Michelle A Valentine's debut Rock the Heart so when I heard she was publishing a paranormal romance I couldn't wait to read it. Demon at my Door is the first book in a new series and is aimed at the new adult market. With the new adult label I have to say I was expecting a higher sexual content than it included, apart from one particular (very hot!) heavy petting scene this really read more like a young adult book. The main character Natalie is 20 but I felt she acted like she was much younger than that and I would have found it more believable if she had been around 16 and at school rather than college.

I'll admit that I wasn't too sure at the beginning of the book whether I was going to enjoy it, it took me a long time to warm to Natalie and I couldn't stand Stew from the very beginning. I hated Stew for the way he treated her but I was almost as annoyed at Natalie for letting him get away with it. Thankfully as the story progressed and I learnt more about her past I started to understand why Natalie acted the way she did, I still didn't agree with what she was doing but it made sense that she would behave like that. I'll never be a fan of Stew but I even came to understand him better by the end of the book. The story definitely picked up for me the moment Rick walked onto the page, I loved him from the beginning and he certainly provided plenty of swoon worthy moments! Rick gives off a bad boy vibe without actually acting like a bad boy, from the very beginning he is protective of Natalie and he is such a good friend to her even while it is obvious that he is interested in so much more. I found it hard to see why Natalie would still be pining over Stew when she had the gorgeous Rick on the scene but then again first love is a very tricky thing! Even when it became clear that Rick had a few secrets that he was keeping I was still firmly on his team.

One thing that I feel I have to mention is the editing, this book could have been so much more enjoyable to read if there hadn't been so many mistakes. If I'd been reading a print copy rather than an ebook I would have been tempted to get out my red pen because on practically every page I'd come across incorrect words (your/you're, too/to, tale/tail to mention a few) or sentences that didn't quite make sense until you'd guessed what the missing word was. If that is something that will drive you insane you may want to wait and hope that an updated version is released but if you can look past it then the story itself is enjoyable. It's hard because you can't really compare a self published novel that costs £1.30 to a traditionally published book that is more likely to be £6.99, I'm just warning you so you'll know what to expect when you buy the book.

Overall I did like Demon at my Door but it didn't manage to blow me away. However, after a rocky start I found myself enjoying the story more and more towards the end which is when things really got going and I can't wait to spend more time with Rick when the sequel is released. If you're a fan of young adult paranormal romance and you don't mind stories with a bit of spice to them then it would be worth giving this book a try.