Review: The Case of the Good-Looking Corpse - Caroline Lawrence 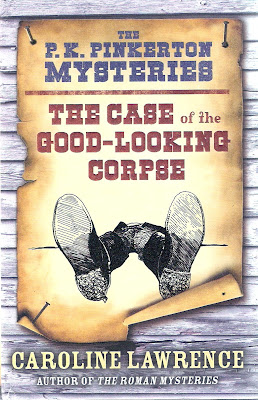 My name is P.K. Pinkerton & I am a Private Eye operating out of Virginia City.

At the moment I am in Jail in the shadow of a hangman's noose. It is all because I tried to solve the biggest mystery here in Nevada Territory & protect a girl who witnessed a terrible crime.

If I write an account of what happened, then maybe I can convince the jury not to hang me by the neck until I am dead.

Review:
I loved The Case of the Deadly Desperados so couldn't wait to catch up with our young detective P.K. Pinkerton as he goes about solving his latest mystery in The Case of the Good-Looking Corpse. I mentioned in my review of the first book that I wasn't sure of P.K's gender and now having read the second book I have to admit that is still the case so I'm going to continue to refer to him as male as that is the way he spends most of his time acting. I have to applaud the author for making me change my mind so many times throughout the book without ever providing a definitive answer though. I think one of P.K's charms is his innocence, the way he refuses to conform completely to one gender or the other and the fact that he has no embarrassment about dressing as a girl when he needs a disguise.

This story picks up right after the last one ends and we see P.K. setting up shop as a Private Detective. Unfortunately nobody seems to take a 12 year old detective seriously so he has plenty of time on his hands while he waits for his first case. That was until a young girl called Martha comes to him for help, she worked as a lady's maid for Short Sally and was the only witness to her murder. Martha is terrified that the killer will come after her next and begs P.K. to solve the case and keep her safe. P.K. is determined to do a good job on his first case to prove that he can make it as a Detective but when his witness goes missing things get a whole lot more complicated.

If you've read the first book you'll already know that P.K. is a young autistic child who has many foibles and eccentricities. He also has a lot of difficulty reading people and understanding their facial expressions which can lead to some amusing misunderstandings. I love P.K's outlook on life, he tries so hard to understand why people do the things they do but at the same time he makes no apologies for the way he sees things. In a lot of ways you could think of him as someone who is quite simple but just to survive in the Wild West as an orphan shows how smart he really is.

Caroline Lawrence does such a fantastic job of pulling you into the story and making it feel like you have stepped back in time, she includes so many little details that just add depth to P.K's world and I can't read these books without having a smile on my face. I'm not sure what age range these children's books are aimed at but can say without hesitation that as an adult I thoroughly enjoy reading them. Alongside P.K. we have been introduced to a great selection of characters and I particularly enjoy watching Poker Face Jace teaching P.K. the signs to look for when someone feeling a strong emotion. If you liked the first book then you'll love this one just as much and I really hope that we get to read more of P.K's adventures in the future.