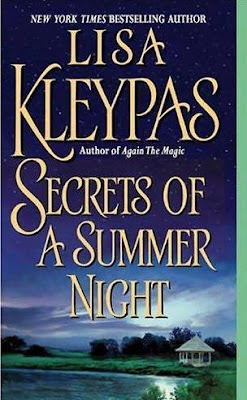 Four young ladies enter London society with one common goal: they must use their feminine wit and wiles to find a husband. So a daring husband-hunting scheme is born.

Annabelle Peyton, determined to save her family from disaster, decides to use her beauty and wit to tempt a suitable nobleman into making an offer of marriage. But Annabelle's most intriguing--and persistent--admirer, wealthy, powerful Simon Hunt, has made it clear that while he will introduce her to irresistible pleasure he will not offer marriage. Annabelle is determined to resist his unthinkable proposition . . . but it is impossible in the face of such skillful seduction.

Her friends, looking to help, conspire to entice a more suitable gentleman to offer for Annabelle, for only then will she be safe from Simon--and her own longings. But on one summer night, Annabelle succumbs to Simon's passionate embrace and tempting kisses . . . and she discovers that love is the most dangerous game of all.

Wallflowers Series:
Again the Magic
Secrets of a Summer Night
It Happened One Autumn
Devil in Winter
Scandal in Spring
A Wallflower Christmas

Review:
Since the death of her father Annabelle's family finances have been getting steadily worse and it has now reached the point where her only option is to find a husband who can support them. Unfortunately after four seasons in London she has yet to find a member of the aristocracy who is willing to marry her. Simon is a self made millionaire who has reluctantly been accepted into society because of his money, he is attracted to Annabelle but the last thing he is offering her is marriage. Annabelle may be drawn to Simon but she doesn't want to become his mistress, unless she finds a husband soon though she may have no other choice.

Although Again the Magic is set in the same time frame and there is a cross over of some of the characters I do think you could read Secrets of a Summer Night first. I loved both books though so would happily recommend them to fans of historical romance. One of the things I loved most about this book was the friendship that develops between the four wallflowers Annabelle, Evie, Lillian and Daisy who we hadn't been introduced to previously. The girls couldn't be more different from each other and are having problems finding suitable husbands for very different reasons but they form a close bond as they set out to find each of them a husband. The interactions between them and the antics they get up to were hilarious and had me laughing out loud on several occasions. I love stories with strong female friendships and this series definitely fits the bill.

I have to admit that I wasn't a big fan of Annabelle's in the beginning. She came across as really shallow and snobbish and I hated the way she looked down on Simon because he had earned his money with hard work and wasn't born with a silver spoon in his mouth. There were times that I felt she didn't deserve him but I'm glad to say that she had really grown on me by the end. She does a lot of growing up realising what is important in life and finding that having a title isn't the be all and end all. Simon was easy to fall for, he was protective, caring and incredibly sexy and I would be happy to take him out of Annabelle's hands! I loved the fact that he didn't make any apologies for who he was, he was rightfully proud of his achievements and didn't give a damn what anyone in society thought of him. Although he had no intention of ever marrying Annabelle at the beginning it doesn't take him long to fall head over heels for her and from that point he will do anything to make her his.

I'm really looking forward to getting to know the other wallflowers better. Evie is painfully shy but with the girls her confidence is slowly starting to grow and I can't wait to see her come out of her shell even more. Lillian and Daisy are the wealthy daughters of an American businessman and their mother is determined to see them marry an English gentleman and gain a title. Although they have plenty of money neither girl is used to London society, they come across as brash and their behaviour scandalises the society ladies. They are both very outspoken and it's going to take a pair of special guys to tame them.

I still can't believe that this is only the second Lisa Kleypas book I've read, she has such a witty writing style and creates such superb heroes that I can't wait to read more of her work. If you love historical romance and haven't started this series yet then you're really missing out and I can't recommend it highly enough.