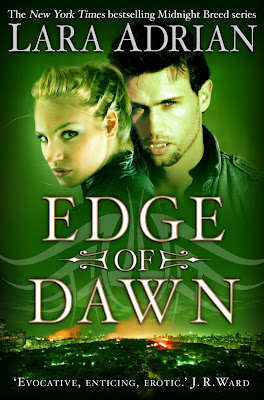 Prepare yourself for seduction as Lara Adrian unleashes a dark new breed of vampire . . .

Twenty years after First Dawn - the morning that followed a blood-soaked night where mankind learned that vampires lived among them - wars and skirmishes continue. Peace between humans and the Breed seems elusive, but the Order and their allies will not rest until it is won. For Mira, raised with the Order from the time she was a child and now the formidable captain of her own team of warriors, the first fight is personal. War with mankind has cost her a great deal - the life of someone she loved dearly.

Vowed to avenge his death, Mira blazes into every battle like a Valkyrie - until an unexpected encounter with a rebel leader brings her face to face with a startling truth, and a betrayal that will cut through her every defence . . . straight to the core of the wounded woman whose faith has never been more tested, not her heart more deeply torn.

Review:
Anyone who knows me already knows what a massive fan I am of Lara Adrian and the Midnight Breed series. I even have a Breedmate mark tattoo so it should be no surprise if I tell you this is my favourite paranormal series. The only thing I don't love about these books is the year long wait between each new instalment so I couldn't wait to get my hands on Edge of Dawn. After events in Darker After Midnight we already knew this book was going to be a game changer but I couldn't have even begun to guess at all the surprises Lara Adrian had in store for us. For the first time in the series this book doesn't follow immediately on from the last, in fact it skips 20 years into the future and introduces us to the next generation of the Breed - the children of our previous heroes and heroines. In some ways I feel a little disappointed that we didn't get to see them grow up but in another I'm just excited to get to know them all as adults and to catch up with the lives of our previous favourites.

Mira has changed a lot from the 8 year old child we remember. She grew up within the Order and even though she is human she has become an impressive warrior who is now in charge of her own team. She is liked and respected by her fellow warriors but has hardened her heart after the death of her childhood friend and crush Kellan. Mira is so focused on getting revenge on the rebels who caused Kellan's death that she sometimes ignores the rules and this often gets her in trouble with leader of the Order Lucan. I found myself feeling so bad for Mira, she lost the one man that she has ever loved and eight years later she is still unable to get past his death. Mira was dedicated to Kellan as a child, they grew up together and just at the point where she felt that they could be something more than friends he was taken from her. When she finds herself captured by a group of human rebels and realises that their leader Bowman is really Kellan she is devastated.  She has spent eight years grieving for a man who wasn't actually dead - he was just hiding from her and the betrayal cuts her deeply. My heart absolutely went out to her at that point and I wanted to kick Kellan's arse for doing that to her!

Kellan had his reasons for letting everyone who loved him believe he was dead but I never really felt that they were justified and that made it very difficult for me to forgive him for his actions. He stayed close enough to keep watch over Mira so he must have seen how much she was suffering without him but he never considered ending her misery. I think because I had such a hard time understanding and forgiving his actions I found it very difficult to believe that Mira would and that made it really difficult to feel fully invested in their relationship. I was also left with too many questions about what Kellan had been up to in the eight years he was gone, we only really know about his most recent mission and how he met the rebel team he now leads, perhaps if I'd learnt about lots of good deeds he'd carried out while he was away I might have found it easier to connect to him. In spite of my reservations about Kellan I did find myself routing for the couple but that was more because I felt Mira desperately deserved her happy ending.

One of the things I enjoyed most about the book was seeing how things had changed in the 20 years since the last book. The fact that humans are now aware of the existence of the Breed added a really interesting dimension to the story and I could understand why tensions were so high between both groups. It was great to get a chance to catch up with some of the previous couples but what I loved most was meeting their children. I had a little trouble keeping track of who was who because there were so many new names to remember but that is something I'm sure will get easier with each book. In some ways this is almost like starting a new series so you have to expect a little confusion while you get to know everyone again. The action was just as good as you will be expecting if you are familiar with Lara Adrian's writing and she once again kept me on my toes by throwing in a really interesting twist right towards the end of the book - one that is going to have another huge impact on the series.

Fans of the Midnight Breed series are going to love getting to know the next generation of the Order and Edge of Dawn is a book you won't want to miss. Since there have been such dramatic changes since the last book I also think that you could probably pick up this book even if you haven't read any of the previous 10 instalments. I personally would recommend starting from the very beginning though, I know it can be off putting starting a series that already has 11 books but trust me this series is worth it and I have really enjoyed every instalment. I can't get enough of these books so my only plea to Lara would be to please, please, please write faster!

Source: Received from the publisher via Edelweiss in exchange for an honest review but I've already purchased a copy to take pride of place on my shelves with the rest of the series.