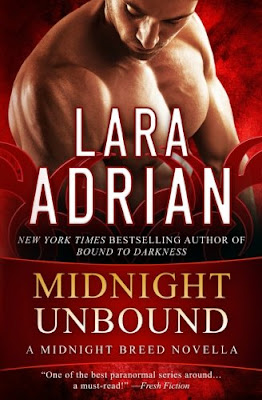 A lethal Breed warrior is called upon by his brethren in the Order to bodyguard a beautiful young widow he’s craved from afar, in this new novella in the "steamy and intense" (Publishers Weekly) Midnight Breed vampire romance series from New York Times and #1 international bestselling author Lara Adrian.

As a former Hunter bred to be a killing machine in the hell of Dragos's lab, Scythe is a dangerous loner whose heart has been steeled by decades of torment and violence. He has no room in his world for love or desire--especially when it comes in the form of a vulnerable, yet courageous, Breedmate in need of protection. Scythe has loved--and lost--once before, and paid a hefty price for the weakness of his emotions. He's not about to put himself in those chains again, no matter how deeply he hungers for lovely Chiara.

For Chiara Genova, a widow and mother with a young Breed son, the last thing she needs is to put her fate and that of her child in the hands of a lethal male like Scythe. But when she's targeted by a hidden enemy, the obsidian-eyed assassin is her best hope for survival . . . even at the risk of her heart.

Review:
I have been looking forward to Scythe and Chiara's story ever since we met them both in Midnight Untamed and Lara Adrian didn't disappoint. The Order are currently busy dealing with a Rogue issue so when Chiara is attacked in her own home they turn to Scythe and ask him to protect her. Scythe is a Gen One Hunter, raised in Dragos' labs he is a lethal killing machine and his unique skill at detecting danger make him a perfect bodyguard but he's used to living alone and isn't keen on spending time with a young breedmate, especially one he hasn't been able to stop thinking about since they first met several weeks ago.

Like all the Hunters Scythe has a pretty heartbreaking backstory, no-one who was raised in those labs came out without both mental and physical scarring but it was an event that happened after his escape that left him most emotionally damaged. I don't want to talk about what that event was but it left Scythe feeling completely unworthy and pretty terrified of having someone under his protection, he doesn't feel worthy of Chiara and he's worried that he will let her down when she needs him the most.

We already know a bit of Chiara's backstory from the previous story, she is a widow with a young son and has pretty much had to rely on herself for the last three years. Her husband was utterly useless and ended up getting both Chiara and her sister-in-law into a lot of trouble, thanks to the Order and Scythe Chiara should now be free to live her own life but now a stalker has put her in danger again. Chiara is determined to deal with this latest threat so that she and her young son Pietro can live their lives without fear but she needs Scythe's help.

I thought Scythe and Chiara were incredibly sweet together, he's so damaged and convinced he doesn't deserve love but Chiara sees the man inside and she won't let him walk away from her. She has had one useless mate and she's not about to let the one man who makes her feel safe and loved walk away from her. Add in little Pietro, who is utterly adorable, and there are some really heart melting moments here, especially in that epilogue.

I love the Midnight Breed novellas, they usually take a step away from the core characters of the series and I enjoy spending time with the Order's Italian team. They don't focus as much on the series story arc so work well as stand alone stories (although fans of the series will enjoy seeing a few familiar faces) and they're more tightly focused on the romance which is nice. There is still plenty of action as Scythe and Chiara try to figure out who her stalker is and what he wants with her but we also get plenty of focus on getting to know the characters so even though the romance plays out fairly quickly it never feels rushed. I'm incredibly excited that we're going to get Trygg's story later on this year but we also have Aric Chase's full length book coming this summer which I just know is going to be fantastic. This series is still going strong and I'm looking forward to many more books set in this world!