Review: After I Fall - Jessica Scott 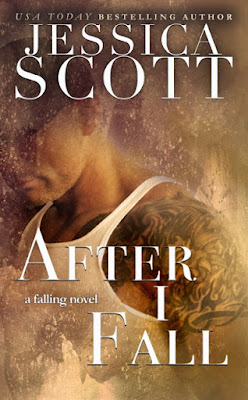 Her entire life has been a lie. Being with Eli is the most honest thing she’s ever done.

Until she meets Eli Winter.

Eli throws her entire life into chaos when he denies her the one thing she wants from him.

One chance encounter stokes her desire for the man who refused to touch her and left her questioning everything.

When Parker tries to help his new business, the spotlight turns on Eli's military record. And the war he's tried to forget may destroy them both.

Review:
I've been wanting to read Eli's story ever since we met him in Before I Fall, the former officer has been a steady influence on both of the heroes from previous books. He runs the local bar and seems to collect wounded ex-soldiers and adopt them into his tribe where he can keep an eye on them. Eli is always watching out for other people and putting their needs first but he's very closed off about his own past and you just know he's keeping a lot of things to himself so I couldn't wait to get to know him better.

I'll admit I was nervous when I found out he was matched with Parker though, what we saw of her in After I Fall didn't exactly leave me with a good opinion of her. She came across as a typical spoilt rich girl, someone who had everything handed to her on a plate and who had no idea what it was like to live in the real world. I wasn't convinced I'd ever be able to root for them as a couple but I just love it when an author manages to change my opinion about a character and Jessica Scott definitely achieved that here. Yes Parker comes from money and she's never had to worry financially but you quickly realise that her life hasn't been a bed of roses. Her problems are very different to anything I've ever experienced but that doesn't make them any less difficult for her to cope with and she gave me a lesson in not judging someone by the size of their bank account!

I thought Eli and Parker made a great couple, they're both incredibly alone in different ways. Eli is surrounded by people that he cares for and who care for him in return but he always feels like he has to be the one protecting everyone else and he doesn't really let anyone know when he's the one who is struggling. Parker on the other hand has never had anyone put her first, her whole life is dictated by what her father wants from her, she has to look good and behave in appropriate ways to help him with his business contacts and she's even been forced into an engagement with a man she doesn't like because her father has chosen him as his future son-in-law. Eli is the first person to really listen to what Parker wants and to encourage her to follow her own dreams and in return Parker is there for Eli in ways that nobody else is. They fit so well together and have fabulous chemistry too.

If there is one thing I wanted to see a little more of it would have been more of what happened after Parker confronted Davis. I really would have loved an extra scene with her father that perhaps showed he cared for her after all but I guess that would probably have been a bit too much of a fairytale because he wasn't very likely to backdown after Parker chose to defy him. I enjoyed the brief appearances by previous characters from the series though and we get to see a lot of Eli's bar staff Deacon and Kelsey which I loved. I really can't wait to read their book later on this year - I need to know more about their previous history!