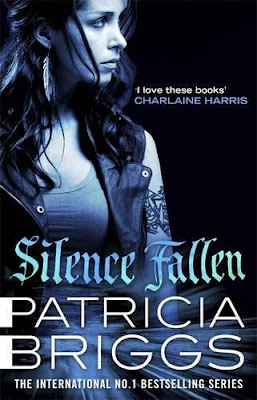 Coyote shapeshifter Mercy Thompson is attacked and abducted in her home territory. Fighting off a crazed werewolf, she manages to escape, only to find herself alone in the heart of Europe, without money, without clothing and on the run from the clutches of the most powerful vampire in the world.

Unable to contact her pack, Mercy has allies to find and enemies to fight, but first she needs to figure out which is which. Ancient powers stir, and Mercy needs to be at her agile best to avoid causing a war between vampires and werewolves - and between werewolves and werewolves. And in the heart of the ancient city of Prague, old ghosts rise. . .

Review:
When Mercy is abducted and whisked abroad by an enemy she finds herself completely alone in a strange country with none of her usual allies on hand to turn to. We've all seen Mercy get herself out of difficult situations in the past but finding her way home from Europe with no money, no passport and no assistance might just be one mess she can't handle. Of course Adam immediately mounts a rescue mission but he's up against powerful enemies and Mercy is a long way away so it's vital that she holds on long enough for him to reach her.

I was lucky enough to get an advanced copy of Silence Fallen and I devoured it as soon as it arrived on my kindle. I loved it so much that I had to go away and reread the entire series (both Mercy's books and the Alpha & Omega ones!) so I could read it again at the correct point in the timeline. This is one of the few series that really does get better and better with every book and I love it more each time I reread it. I'll admit I was a bit disappointed when I found out that Mercy and Adam would be separated for much of the story but when I realised that we'd be getting a very large chunk of the book in Adam's POV it more than made up for my worries.

Mercy may be the star of this series but her relationship with Adam is integral and I loved the chance to spend more time in his head to see exactly how he was dealing with things. They both have very important roles to play in this book, Mercy manages to escape but has to try and stay out of their enemy's clutches while Adam is forced to take a more passive role as a negotiator to try and make sure their enemy knows he's messed with the wrong pack of werewolves. I thoroughly enjoyed both of their storylines and I loved the way Patricia Briggs played around with the timeline so cleverly. The story unfolds in a nonlinear fashion so it jumps around a little and you need to pay attention but it really helped to add extra tension.

I've never considered Mercy to be a helpless character and she proves her resilience again here, she may not be as strong as the vampires and werewolves physically but she's smart and cunning and she knows how to use that to her advantage. People constantly underestimate her and that's always their undoing but I love watching her worm her way out of impossible situations. Adam is out of his mind with worry when Mercy is taken, especially because he knows how badly she was injured and he isn't there to protect her or make sure she's safe. He will call in any favour he has to to get to her but he trusts her to keep herself safe in the meantime. I love that Adam is the one person who knows exactly what Mercy is capable of, that never stops him worrying about her or wanting to protect her but he also respects her need to be independent and stand on her own two feet.

I don't want to give anything else away about the plot but I loved the change of setting and really enjoyed getting to meet a whole bunch of new characters both friends and foe. I've found the pack politics has been getting a little annoying in the more recent books (although thankfully that seems to have been solved in Fire Touched) so it was nice to take a step away from home and avoid some of the pack members who have been causing trouble lately. Of course Adam isn't alone when he mounts is rescue mission so you'll see a few familiar faces which is always nice. I was actually surprised about how much I ended up liking a character I've loved to hate in previous books. The story had me totally hooked from beginning to end and I didn't want to put it down even the second time I read it. If there is one thing I would change it would be to have a longer section at the end after Mercy and Adam been reunited - not because the story needed it but because I'm greedy and I adore spending time with them as a couple! This is one of my favourite urban fantasy series, it's a comfort read that I revisit at least once a year and again I've been left itching to get my hands on the next instalment.