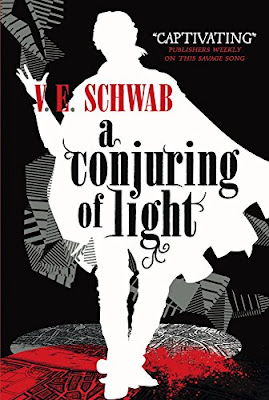 The precarious equilibrium among the four Londons has reached its breaking point. Once brimming with the red vivacity of magic, darkness casts a shadow over the Maresh Empire, leaving a space for another London to rise. Kell - once assumed to be the last surviving Antari - begins to waver under the pressure of competing loyalties. Lila Bard, once a commonplace - but never common - thief, has survived and flourished through a series of magical trials. But now she must learn to control the magic, before it bleeds her dry.

Meanwhile, the disgraced Captain Alucard Emery and the Night Spire crew are attempting a race against time to acquire the impossible, as an ancient enemy returns to claim a crown and a fallen hero is desperate to save a decaying world...

Review:
A Conjuring of Light was exactly what I wanted from the finale of the Shades of Magic series and I love it when a series goes out on a high note! At 666 pages this is a whopper of a book but there is just so much going on that it honestly doesn't feel like it and I flew through it in a couple of days. The action is pretty much non-stop from the first few pages and there is twist after twist as you follow all of our favourite characters to the end. This story isn't all sunshine and roses, there are heartbreaking moments and I'll warn you right now that not everyone survives the book but there are also fantastic friendships and some incredibly sweet and romantic moments to lighten the mood just when you need them.

First let me talk about how much I adore the brotherly bond between Kell and Rhy, these two are brothers by choice even if not by blood and their friendship never fails to make me smile. One of my favourite moments in the book was a conversation Rhy had with his mother near the beginning of the story about the bond he shares with Kell and I think this quote sums up their relationship perfectly:

Rhy shook his head, exasperated. “Kell isn’t the only one you fail to understand. My bond with him didn’t start with this curse. You wanted him to kill for me, die for me, protect me at all costs. Well, Mother, you got your wish. You simply failed to realize that that kind of love, that bond, it goes both ways. I would kill for him, and I would die for him, and I will protect him however I am able, from Faro and Vesk, from White London, and Black London, and from you.”

I also love the relationship between Kell and Lila, they have a lot in common and now that Lila has grown up a bit (she irritated me a bit in the last book but showed a massive character growth in this one!) I think they make a really cute couple. I like that Lila has learnt to accept that she doesn't know everything and that she's willing to take Kell's advice and learn from her mistakes. She's still a very proactive character who doesn't sit around waiting to be saved and is much more likely to be right in the middle of any trouble rather than watching from the sidelines but she's lost a bit of that cocky edge that made her annoying rather than just confident. Kell has changed a lot too, he has the weight of his whole world on his shoulders and that's a lot of stress for anyone to deal with but he is determined to fix the mistakes he made and resolve things. I was shipping Rhy and Alucard so hard from the middle of the last book and that didn't change here. They have a lot of history between them and not all of it is good but I was rooting for them to find a way back to each other.

I think the most surprising character award would have to go to Holland. I never expected to end up liking him after what he did in A Gathering of Shadows but we get to see some really interesting glimpses into his past that showed exactly how he ended up making the choices he did. I still don't agree with his actions but it wasn't too hard to imagine Kell or even Lila making similar choices if they were in his position to begin with. He also works really hard to try and fix the mess he made and I enjoyed the grudging respect that slowly builds between him, Kell and Lila.

A Conjuring of Light was a fantastic end to this story arc but I'm kind of hoping that V.E. Schwab isn't done with this world yet. I think things were definitely left open enough that we could have more adventures in this world but don't worry you're not left with a horrible cliffhanger so it won't matter if there are no more books to come. I'm going to miss Kell, Rhy and the rest though so I hope we'll see more of them in the future.