Review: Magic for Nothing - Seanan McGuire 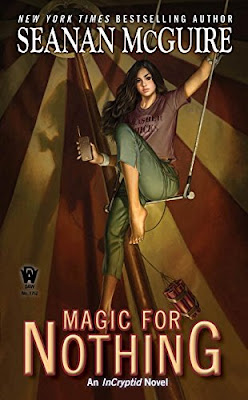 As the youngest of the three Price children, Antimony is used to people not expecting much from her. She's been happy playing roller derby and hanging out with her cousins, leaving the globe-trotting to her older siblings while she stays at home and tries to decide what she wants to do with her life. She always knew that one day, things would have to change. She didn't think they'd change so fast.

Annie's expectations keep getting shattered. She didn't expect Verity to declare war on the Covenant of St. George on live television. She didn't expect the Covenant to take her sister's threat seriously. And she definitely didn't expect to be packed off to London to infiltrate the Covenant from the inside...but as the only Price in her generation without a strong resemblance to the rest of the family, she's the perfect choice to play spy. They need to know what's coming. Their lives may depend on it.

But Annie has some secrets of her own, like the fact that she's started setting things on fire when she touches them, and has no idea how to control it. Now she's headed halfway around the world, into the den of the enemy, where blowing her cover could get her killed. She's pretty sure things can't get much worse.

Antimony Price is about to learn just how wrong it's possible for one cryptozoologist to be.

Review:
I love this series so I was quite excited when I found out that it was time for Antimony, the youngest of the Price siblings, to take the spotlight. She's not had a major role in the previous books but I enjoyed her short stories (if you haven't already discovered all the free short stories that Seanan McGuire posts on her website you're really missing out, they give so much extra background insight into the series and are well worth reading!) and was looking forward to getting to know her better.

Magic for Nothing picks up the story right at the end of Chaos Choreography where Verity makes a rather huge announcement on national TV and pretty much taunts the Covenant of St George to come looking for her and the rest of her family. I have to agree with Annie that Verity didn't really think things through before she made that declaration but she'd been through quite a lot at that point and I don't think there was a chance that the Covenant would have missed her battling a giant snake god on live TV so the gig was pretty much up before Verity even said a word! Anyway, the Covenant now know that the family are still out there and the Prices are in desperate need of information about what their future plans are so they have the brilliant idea of sending Annie, the black sheep of the family, to London so she can infiltrate the Covenant and spy on them. If you think that sounds like a disaster just waiting to happen you wouldn't be far wrong. Let's face it, it's not going to be easy for Annie to join up with the enemy and pretend to be brainwashed into their way of thinking.

Annie's parents have always been incredibly over protective of her, she's the baby of the family and they are much harder on her than they ever have been on Verity and Alex so it was a little surprising that they'd be willing to send her into the clutches of the Covenant. Annie will be completely alone when she's carrying out her mission, it's not like the rest of the family can hop on a plane to mount a rescue mission if she gets in trouble and they don't even have Cryptid contacts in London to keep an eye out for her as the local populations have been decimated by the Covenant's purges. Annie has certainly taken on a huge task when she agrees to the challenge, especially considering a rather large secret that she's been keeping from everyone, one that could very easily lead to her being caught by the Covenant. I have to say I admired her bravery and her determination to prove herself to her family, she always wanted them to respect her more so she jumps at this chance to show them what she's capable of.

It's very hard to like any of the Covenant members, I know the Price family has a history of converting them but I'm not convinced any of the characters we meet here will be willing to leave the dark side. It was interesting to get to see more of their distant cousin Margaret though, I don't particularly like her but she hasn't had it easy because the Covenant see her family as traitors and are constantly checking up on her to make sure she doesn't follow suit. Leon seems the most likeable but I'm still very wary of him and all of the others. After completing her Covenant training Annie is sent on her first mission and it was at this point that I really started falling in love with the side characters. Sam was a particular favourite and I really, really hope we get to see more of him in the next book, I just thought he and Annie were adorable together.

Magic for Nothing has a different feel to it than the previous books in the series, the stakes are higher than ever and Annie is completely cut off from the family for most of the book so she's totally on her own trying to handle everything. The aeslin mice are on hand to add plenty of humour though, even if they are there as a sort of black box for Annie and are supposed to report back to the family in case anything happens to her. The ending was pretty heartbreaking in several ways, poor Annie has jumped out of the frying pan and landed in the middle of the fire so it's going to be really interesting to see where she goes from here. I was already a huge fan of this series but now I'm more eager than ever for the next instalment and I can't wait to spend more time in this world.