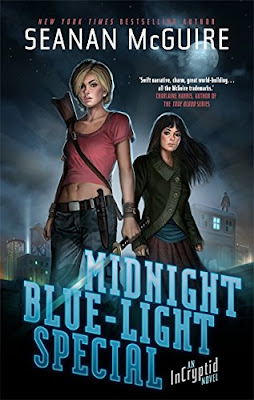 The Price family has spent generations studying the monsters of the world, working to protect them from humanity--and humanity from them. Enter Verity Price. Despite being trained from birth as a cryptozoologist, she'd rather dance a tango than tangle with a demon, and when her work with the cryptid community took her to Manhattan, she thought she would finally be free to pursue competition-level dance in earnest. It didn't quite work out that way...

But now, with the snake cult that was killing virgins all over Manhattan finally taken care of, Verity is ready to settle down for some serious ballroom dancing-until her on-again, off-again, semi-boyfriend Dominic De Luca, a member of the monster-hunting Covenant of St. George, informs her that the Covenant is on their way to assess the city's readiness for a cryptid purge. With everything and everyone she loves on the line, there's no way Verity can take that lying down.

Alliances will be tested, allies will be questioned, lives will be lost, and the talking mice in Verity's apartment will immortalize everything as holy writ--assuming there's anyone left standing when all is said and done. It's a midnight blue-light special, and the sale of the day is on betrayal, deceit...and carnage.

Review:
Verity is reaching a crossroads, she's nearing the end of the time she allowed herself to spend in New York to build her dancing career and now she has to decide whether to continue chasing her dream. As much as she loves dancing she has spent her whole life training to be a cryptozoologist like the rest of her family and it's becoming harder and harder to keep both sides of her life separate. Especially when she finds out that the Covenant of St. George is sending a team to New York to check up on Dominic and help him purge the city of cryptids.

Dominic was raised by the Covenant and he used to believe the company line that all cryptids are evil but verity has shown him a whole new side to the cryptid population and it's made him question everything. Unfortunately now that the Covenant is sending a team to check on him it's not going to take long for them to realise that he has been making false reports about the lack of cryptids in the city. What remains to be seen is whether Dominic will go against the people who raised him to help Verity protect the cryptids she loves.

Midnight Blue-Light Special is a fantastic instalment in the Incryptid series, the stakes are higher than ever before for Verity and it's time for both her and Dominic to make some very difficult decisions. I loved seeing Verity bring the entire cryptid community together to protect themselves against the Covenant, she calls in a few favours from family members too and although they're aiming to stay under the Covenant's radar they're all very willing to fight to protect themselves if needed. Verity is such a brilliant character, she's so protective of everyone she cares about and I really enjoy the scenes of her free-running across the city rooftops. I was pleased that she stayed in communication with Dominic throughout the story, they're from very different backgrounds but they are willing to work together and talk through their issues so there is no unnecessary relationship drama between them.

Side characters that we met in the previous book are given a chance to shine too. I loved getting to know Istas and Ryan better (and I've since read & thoroughly enjoyed the short stories about them that you can download on Seanan McGuire's website) the scenes with Istas and the Aeslin mice were hilarious and added some much needed levity to the book when things took a darker turn. Verity's cousin Sarah also really outdid herself here and I loved the chapters she narrated, she's such a dangerous breed that a lot of other cryptids look at her as a monster but she has worked incredibly hard to fit in with her family and go against her nature. She has to unleash her powers here to save Verity though and she pays a high price for it which I'm sure we'll see explored further in subsequent books.

Talking of the next instalment I'm kind of excited that Verity's brother Alex is taking over the narration for Half-Off Ragnarok. Not because I don't enjoy Verity and Dominic's story (I'm glad we'll be revisiting them in the future) but because I'm looking forward to meeting new characters and getting to explore another section of the Incryptid universe. This series really is becoming one of my favourites and I'd highly recommend both the full length novels and the numerous free short stories that add so much background to the world Seanan McGuire has created. These books have been the perfect blend of action and humour with a wonderful range of supernatural creatures and just the right amount of romance so I'm excited to continue reading them.