This review includes all the short stories that have been written about Istas & Ryan, stories by other narrators will be reviewed separately.

Short Stories narrated by Istas and Ryan (circa 2013-2015):
(Unless otherwise stated all stories are available for free on the author's website)
Red as Snow (in the Hex and the City anthology)
Black as Blood
White as a Raven's Wing 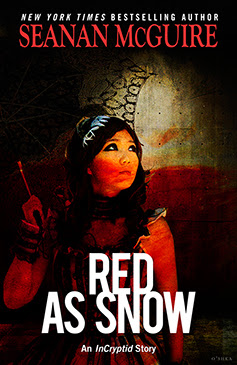 For Istas—born waheela at the top of the world, where the thaw never comes and the cold needs no name—adjusting to life in Manhattan has been difficult, but worth the struggle. For the first time, she can make her decisions based on what she wants, not what she must do to survive. For Ryan Yukimura, her tanuki boyfriend, this is a welcome change, and one that he's hoping to encourage.

It's really too bad that neither of them could predict that Istas's family would be upset about her disappearance, or that they would have reason to come hunting for her. New York City may be in for an early freeze, and Istas may find that her old life is stronger and more dangerous than her new one could ever hope to be...

Review:
We first met Istas and Ryan in Discount Armageddon but it was in Midnight Blue-Light Special that they really shone so I was glad there are some additional short stories about the two of them. They're quite an odd couple really but they fit really well together and I think it's really great that Seanan McGuire is giving us the chance to learn more about some of the Incryptid characters.

Red as Snow gives us the chance to learn a bit more about Istas's background and waheela customs, let's just say that Ryan isn't exactly welcomed into the family with open arms by her father and brothers. Luckily Istas and Ryan know each other really well and they're a perfect team when they need to be. I'm really looking forward to reading the next two stories about this couple and hopefully we'll get to meet Ryan's family next. 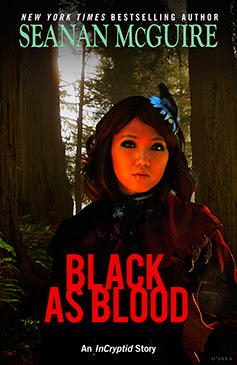 Things are getting serious between Ryan Yukimura and Istas of the Waheela—enough so that it's time for Istas to experience one of the great milestones of a tanuki relationship. It's time for her to meet the parents. Of course, that means flying to the other side of the country, in a plane packed full of humans, to spend time in someone else's territory. What could possibly go wrong?

Unfortunately for Istas, the humans aren't the problem. When confronted with the stark reality that she and Ryan will never be members of the same species, will she be able to continue with the relationship? Or will she be forced to admit that blood will always tell, and that in the cryptid world, she will always be a monster?

Review:
You know that saying "be careful what you wish for" well I should have heeded that before getting excited about the fact we were getting to meet Ryan's family because unfortunately they're a rather prejudiced and mean lot. Not as violent and aggressive as Istas' family for sure but certainly much ruder.

You see Ryan is a tanuki, a Japanese shapeshifter with several forms but all apart from the human version have similarities with the Japanese racoon dog. His kind has been nearly wiped out by the Covenant of St George (we already know what a lovely bunch they aren't from the main books!) so his family have been encouraging Ryan to find a mate and settle down. Unfortunately they're not happy that he's chosen Istas. She's a waheela and her breed is considered monsters by most of the other cryptids. Istas was born on the frozen wastes of the north and she has to fight against the constant hunger that is inside all waheela but Istas has worked hard to get to where she is now and Ryan adores her.

I was incredibly annoyed with Ryan's family (especially his AWFUL mother!) because they didn't even give Istas a chance before shunning her. I was prepared for them to be wary but they should trust Ryan enough to know he wouldn't bring home some kind of a monster who was going to attack them all as soon as she walked through the door and I felt they could have at least tried to get to know Istas before being so mean to her. I absolutely loved Istas' set down to his mother but it ended a bit abruptly after that and I needed his family to have made more of an effort to apologise. Just extending it by a single scene where they attempted to build bridges would have made it a much more satisfying read. It seems a bit petty to complain about a free short story though and I'm glad I still have one more left to read about this couple so I'm hoping things will be resolved in White as a Raven's Wing.


White as a Raven's Wing 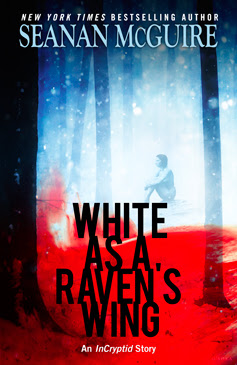 Ryan and Istas have been dating happily for quite some time, and now it seems that they're ready to take the next big step: marriage. But what is normal for a tanuki is not for a waheela, and before she can make a lasting commitment in Manhattan, Istas must return to Kugluktuk to conclude her affairs in the world where she was born.

From the urban sprawl to the white wastes at the top of the world, Istas and Ryan will travel to answer the question of who she is and where she truly belongs. For no member of her family has ever gone into the thaw and remained there, and for the waheela, born as they are to the cold that never ends, a happy ending may seem to be impossible.

However this goes, it will be an ending.

Review:
Ryan is ready to take that next step in their relationship and he has asked Istas to marry him. She wants to be his wife and have his children but there's just one small thing she has to do before she can - return to her homeland and kill her other husband. It's time for Istas to face her demons once and for all so she can move on with her life but will Ryan still want her when he's seen exactly where she came from?

I've really enjoyed the Istas and Ryan short stories, they're such a great couple and even though they face a lot of challenges due to their different species they fit together really well. Although Ryan knows most of Istas' past she has never quite let him see the worst that the waheela have to offer and she's afraid that he'll walk away when he's seen her darkest side. She knows that she has to be honest with him before they move forward with their relationship though so one hellish journey to Canada later and she's ready to face her family for a final time.

I'm a little disappointed that this is the final story about this couple, not because I didn't enjoy it but because I'd like to see more of them. I think more than anything I'd like some closure with Ryan's family. Considering the way they treated Istas in the last short story I'd have liked to be shown them interacting with her in a positive manner. Of course I always love a good wedding too so I wouldn't mind an insider look at their big day either! I'll be keeping my fingers crossed that Seanan McGuire decides to revisit the couple in the future.
at 18:00