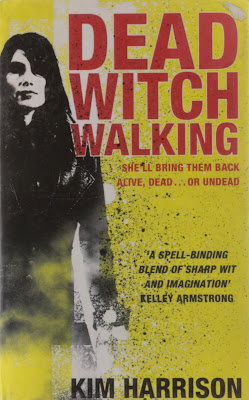 Forty years ago a genetically engineered virus killed half of the world's human population and exposed creatures of dreams and nightmares that had, until then, lived in secret alongside humanity.

Rachel Morgan is a runner with the Interland Runner Services, apprehending criminals throughout modern-day Cincinnati. She is also a witch.

Used to confronting criminal vampires, dark witches and homicidal werewolves, Rachel's latest assignments - apprehending cable-stealing magic students and tax-evading leprechauns - have prompted her to break her thirty-year contract with the I.S. and start her own runner agency.

But no one quits the I.S.

Marked for death, Rachel is a dead witch walking unless she can appease her former employers and pay off her contract by exposing the city's most prominent citizen as a drug lord. But making an enemy of the ambiguous Trent Kalamack proves even more deadly than leaving the I.S.

The Hollows Series:
Dead Witch Walking
The Good, the Bad and the Undead
Every Which Way But Dead
A Fistful of Charms
For a Few Demons More
Where Demons Dare (Published in the US as The Outlaw Demon Wails)
White Witch, Black Curse
Black Magic Sanction
Pale Demon
The Hollows Insider
A Perfect Blood
Ever After
The Undead Pool
The Witch with No Name

Review:
I first discovered Kim Harrison's Hollows series about seven years ago and I remember devouring the first 6 or so books (all that was available to buy at the time) but somehow, what with my ever expanding TBR pile, I never got around to reading the rest of the books as they were published. It's been so long now that although I still have an overall fondness for the series I can't remember much of the detail from those early books so I think I'm well overdue a reread before I finally find out how the series ends.

I'm going to write this review assuming you're totally new to this series so let's talk about the world that Kim Harrison has created. Imagine a world where half the world's human population was accidentally decimated by a man-made virus that spread through genetically modified tomatoes. Humans no longer have the largest population on the planet and that allowed supernatural creatures (who prefer to be known as Interlanders) such as witches, vampires and all kinds of other beings to step out of hiding. It helped that Interlanders had a natural immunity to the virus so they were able to step up and stop the world from falling to pieces as millions of humans started dropping like flies but that doesn't mean humans were thrilled to discover that monsters have been walking alongside them this whole time.

Now there is an uneasy relationship between humans and Interlanders, for the most part the groups are segregated living in different communities but there will always be some crossover. Humans don't trust Interlanders and they formed a human only police force, the FIB (Federal Interland Bureau) to monitor the Interlanders. At the same time the Interlanders formed their own agency, the I.S. (Interland Runner Services) and although they focus more on the most dangerous Interland criminals there is still a lot of rivalry between the two sides.

Rachel Morgan is a witch who works as a runner for the I.S. but she doesn't have the best relationship with her boss and she's always getting stuck with the worst possible jobs. Sick of being taken advantage of she decides to walk away from the I.S. and start her own agency but, unfortunately for her, nobody gets to just walk away from the I.S. so she's now in a whole heap of trouble. Especially when Jenks, her pixy back-up, and Ivy, a vampire who happens to be the I.S.'s best runner, decide to leave with her.

I loved Dead Witch Walking from the first page, it was just so nice to be back in this world again and I thoroughly enjoyed catching up with Rachel, Jenks and Ivy. These three work together so well as they each have different strengths and weaknesses and I think they make a great team. I have to admit that Jenks and his family are favourites because they add a lot of humour to the story but Rachel is a brilliant heroine and I enjoy being inside her head. I love the world building in this series, there is always something fun about series where humans are aware of the supernatural creatures living amongst them and I like all the little details the author has included like the way humans react to tomatoes or how prejudiced they are towards Interlanders. I am still a bit confused about why they have turned so far against all forms of science though, it makes sense that they'd be wary but they've lost so much technology that they can't even treat a lot of fairly common illnesses and that can only be a bad thing. Perhaps they'll see the light as the series continues and start to rebuild what they've lost but I'm not convinced it's going to happen.

Either way I'm just so glad that I've decided to revisit this series and I can't wait to carry on reading.