Review: The Good, The Bad and The Undead - Kim Harrison 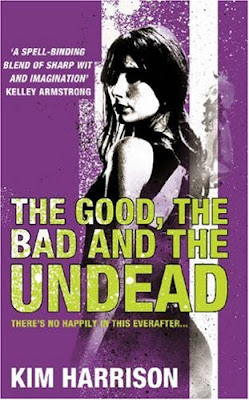 During the last few months, former bounty-hunter Rachel Morgan has been rather busy. Having escaped relatively unscathed from her corrupt former employers, she's not only acquired a vampiric room-mate called Ivy, faced werewolf assassins and battled shape-shifting demons, but has also found the time to pick up a boyfriend (even if he is only human) and open her very own runner agency. But cohabiting with a vampire, however reformed, has it's dangers. Ivy's evil vampire ex-boyfriend has decided that he wants her back, and views Rachel as a tasty side-dish. To make matters worse, Rachel's demon mark is the ultimate vamp-aphrodisiac; one that works both ways.

The stakes are high, and if Rachel is to save herself and her roommate she must challenge the master vampire and confront the dark secrets she's kept hidden even from herself.

The Hollows Series:
Dead Witch Walking
The Good, the Bad and the Undead
Every Which Way But Dead
A Fistful of Charms
For a Few Demons More
Where Demons Dare (Published in the US as The Outlaw Demon Wails)
White Witch, Black Curse
Black Magic Sanction
Pale Demon
The Hollows Insider
A Perfect Blood
Ever After
The Undead Pool
The Witch with No Name

Review:
I read the first few books in this series years ago but it was only when I started my reread recently that I remembered how much I enjoyed this world. Rachel isn't perfect but she's a great character because she's so flawed. She makes stupid mistakes and she's far too trusting but she's learning and I'm hoping she won't keep repeating the same errors over and over again. I'm enjoying seeing her learn more about the magic she is capable of, she came across as a fairly mediocre witch in the beginning but it looks like  she has more power than she realised. We learn a bit more about her background and a connection between her family and Trent's which I think is extremely interesting. Trent's character definitely has me intrigued, he has a bad side but I'm starting to wonder if he's not quite as evil as first suspected.

I think my main pet peeve in this book was her boyfriend Nick who, lets face it, is a bit of a wet blanket and I have absolutely zero idea what Rachel sees in him - especially considering all the lies and secrets he's keeping. The other thing that gets on my last nerve is her relationship with vampire Ivy. The two are supposed to be friends and business partners but their relationship presses all my buttons in the completely wrong way. I get that the author is trying to show that vampires are dangerous but Ivy crosses so many lines that it's just not funny. Their relationship feels abusive to me, there are many times Ivy either can't or won't take no for an answer and Rachel is constantly making excuses for her. What's even worse is that Rachel then blames herself for doing things that triggered Ivy's "vampire instincts" and that really rubs me up the wrong way. If you had a male character who acted the way Ivy does then I think a lot of people would be really angry about the way the situation was handled and it's probably the main thing that makes me reticent to continue the series.

Having said that there is a lot to love about these books so I'm going to push through and hope Ivy  either has a serious attitude adjustment or that someone stakes her and puts me out of my misery! Jenks and his family are brilliant, I already mentioned my love for Rachel and curiosity about Trent and I'm also kind of curious about Big Al too. He's got the better of Rachel every time they've met so far and she's in a whole heap of trouble because of that but I can't help wanting to see how she gets herself out of it.