Today I have a guest review from the awesome Aly from Aly's Miscellany, I've been online friends with Aly since we met on Goodreads about 6 years ago (you can go and stalk her fab reviews here) and we finally got to meet in person for the first time a few months ago. Thanks so much for writing this guest review Aly! 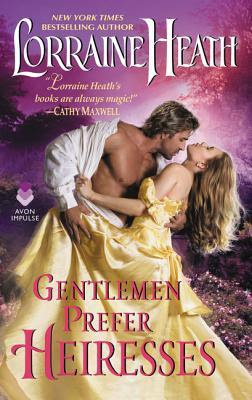 Lord Andrew Mabry, the second son of the Duke of Greystone, has no desire to marry. As the spare, he has no obligation to provide an heir and he rather enjoys spending his days and nights in play with the demimonde. But more and more of late, he finds himself wanting to play naughty games with the American heiress, Gina Hammersley.

After her scandalous older sister marries a marquess, Gina Hammersley suddenly finds herself the darling of London with beaux a plenty calling on her, sending flowers, and filling her dance cards. Unfortunately, the one she desires most is the one who has no wish to be caught in the marriage trap: Lord Andrew Mabry.

But when they are discovered in a compromising situation, this unlikely pair must decide whether to face scandal or discover if the passion they’ve always felt is strong enough to lead them into love.

Scoundrels of St. James Series:
In Bed with the Devil
Between the Devil and Desire
Surrender to the Devil
Midnight Pleasures with a Scoundrel
The Last Wicked Scoundrel

Scandalous Gentlemen of St. James Series:
(Features children of characters from the Scoundrels of St. James series)
When the Duke Was Wicked
Once More, My Darling Rogue
The Duke and the Lady in Red
An Affair with a Notorious Heiress
Gentlemen Prefer Heiresses (Novella)

The Hellions of Havisham Series:
(Some crossover of characters from the Scoundrels of St. James series)
Falling into Bed with a Duke
The Earl Takes All
The Viscount and the Vixen
When the Marquess Falls (Novella)

Aly's Review:
This novella is the story of Lord Andrew Mabry, the brother of Lady Grace(When the Duke Was Wicked) and Alistair, Marquess of Rexton(An Affair with a Notorious Heiress) and the son of Frannie Darling and Sterling Mabry, the eighth Duke of Greystone(Surrender to the Devil), and Gina Hammersley, the sister of Tillie, Lady Landsdowne(When the Duke Was Wicked). It starts with the wedding of Rex and Tillie where the hero and heroine serve as best man and maid of honor.

Gina is an American who fell in love with Englend when she moved here for her sister's debut. She was only 11 when that happened and, being an heiress, her dream was to marry a Peer of the Realm. Her sister's scandal influenced her debut, she wasn't as sought after because of her, even though her dowry was vast. Everything started to change when her sister met Rexton. Gina started having the debut she envisioned as a child and she met Rexton's brother, Andrew. She was intrigued with him from the start, even though he wasn't an Earl, Marquess or Duke.

After her sister married, she moved with the Duke and Duchess of Greystone and started spending even more time with Andrew. They could talk about everything, they had fun together and, most importantly, they understood each other. Gina shared her wish for adventures so, Andrew thought it was a great idea to take her to a brothel(kid you not!), to teach her to play cards and many other "unfeminine" activities.

I loved how they interacted with each other. Andrew never lied to her or treated her like a 2nd class citizen because she was a woman. He had a bit of an inferiority complex thanks to a woman who only thought he was good for sex because he wasn't on the way of inheriting a title. That colored his view and he kept expecting Gina to treat him differently because of it. It never happened.

This was lovely novella, I enjoyed catching up with favorite characters and seeing Gina and Andrew get their HEA.

Favorite Quote:
(After Andrew took Gina to the brothel)


"I couldn't pass up the opportunity to speak with a woman of experience about what transpires between a man and woman. Tillie and I have never spoken of the details. Like you, I don't want to make a fool of myself the first time."

"You could have asked me."

"That would have been highly inappropriate."

"Yet going to a brothel with me wasn't?"

Her face warmed. She didn't think she could have gone with anyone else. She'd spoken true. She did trust him. And not only because he was Rex's brother, but because she sensed he would protect her at all costs. And he'd always shown her kindness. While his attention had seemed brotherly on the surface, she'd often felt an undercurrent of desire simmering through him. Or perhaps it was only wishful thinking on her part. He'd never done anything untoward. More's the pity.