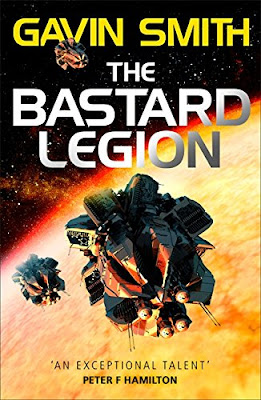 Four hundred years in the future, the most dangerous criminals are kept in suspended animation abroad prison ships and "rehabilitated" in a shared virtual reality environment.

Miska Corbin, a thief and hacker with a background in black ops, has stolen one of these ships, the Hangman's Daughter, and made it her own.

Controlled by explosive collars and trained in virtual reality by the electronic ghost of a dead marine sergeant, the thieves, gangsters, murderers and worse are transformed into Miska's own private indentured army: the Bastard Legion.

But are the mercenaries just for fun and profit, or does Miska have a hidden purpose connected to her covert past? And how fat is she prepared to go to find out?

Review:
Just to let you know this story was originally published under the title The Hangman's Daughter (ebook only) and has now been rereleased as The Bastard Legion. As far as I'm aware the story hasn't changed.

Miska is a ex special forces veteran and an expert hacker and she has used her skills to hijack a prison ship containing thousands of violent prisoners in suspended animation. The prisoners are supposed to be rehabilitated via virtual reality but Miska has something very different in mind - turning them into her own private army. After taking control of the ship Miska fitted each of the prisoners with an explosive collar around their neck and it didn't take long to prove to them that any disobedience would cause them to lose their heads. With the help of an electronic ghost of a marine sergeant Miska has set out to train the prisoners and turn them into an elite group of mercenaries. She knows the prisoners would happily kill her but unless they can figure out a way to remove their collars she's in no danger right now.

I thought The Bastard Legion was an incredibly promising start to this new series, I kind of love the idea of taking a bunch of violent murderers and turning them into elite soldiers even though it's pretty terrifying to think of the damage they could do once they're fully trained. Miska is a totally kickass character who is a skilled fighter but at the same time she's not exactly the most likeable character, she is pretty willing to use the prisoners as canon fodder and she doesn't seem to have much of a conscience. Okay these guys all did something horrible to earn their prison sentence but she's basically turned them into slaves and that did make me feel kind of uncomfortable, especially when so many of them died. It takes a long time to reveal why Miska is so set on her plan and I think even now there are things going on behind the scenes that we're not aware of yet but she's definitely ruthless and not afraid to make difficult choices.

The story is incredibly action packed, there is always something going on and danger comes from all kinds of directions so try not to get too attached to anyone because you never know who is going to end up dying next. There were a few prisoners I'm curious about getting to know better but it's hard to know how much anyone can be trusted when they're in such a controlled environment, it'll only be when (or if) the collars come off that we'll really see the true measure of people. Some of them definitely seem to have more of a conscience than Miska though and it was quite amusing to see murderers question the morality of what she was doing.

It took a while to get into this book but by midway through I was totally hooked and I'm very curious to see how things play out in the next book. I have a feeling there is a lot more to Miska than meets the eye and it's going to be interesting to see if she's really as hard as she acts or if there is a nicer side to her buried down deep.