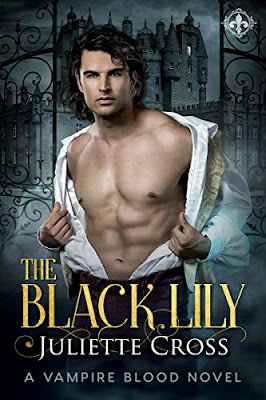 With the threat of the vampire monarchy becoming stronger every day, the Black Lily must take drastic measures. As the leader of the underground resistance, Arabelle concocts the perfect idea to gain the attention of the Glass Tower. Her plan? Attend the vampire prince’s blood ball and kill him. Fortunately for Prince Marius, her assassination goes awry, and Arabelle flees, leaving behind only her dagger.

Marius is desperate to find the woman whose kiss turned into attempted murder, hunting for the mysterious assassin he can’t push out of his mind. But what he uncovers could change the course of his life forever...

Review:
I left it a long time between reading this one and finally getting around to writing my review so I'm going to keep it fairly short and sweet but I loved The Black Lily. This is a Cinderella retelling with a twist, Arabelle isn't a simpering idiot who is desperately waiting for the prince to save her, in fact she's the leader of the rebellion and the only reason she's attending the ball is because she intends to kill the vampire prince. Arabelle is sick of the vampires abusing their powers and getting away with murdering people and she's determined to lead a revolution that will put the humans back in charge. Marius had no idea he was Arabelle's target so it comes as quite a shock when she stabs him when he's in the middle of seducing her. He's so surprised by her attack that she managed to escape while he recovers from being stabbed in the heart but there is no way he'll let her get away with that so he sets out to hunt her down.

This was such a fun enemies to lovers romance, the attraction between Arabelle and Marius is pretty much instant but I can get on board with lust at first sight so that wasn't an issue. Although their relationship developed quite quickly it never felt rushed and I was definitely on board with the fact that Arabelle was an independent and experienced woman who knew what she wanted and was willing to fight for her people. There was more to Marius than first met the eye and he wasn't just a pampered prince who was used to being waited on.

The story has more to it than romance, there was lots of action too and we're introduced to some really fun characters along the way, I have a pretty good idea who the next couple will be and I'm definitely exited to spend more time in this world. Once I'm caught up with this series I think I'm going to have to start working my way through Juliette Cross' backlist too!