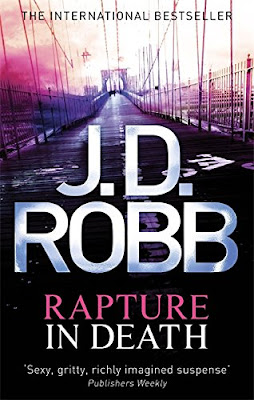 He killed himself, Lieutenant. He was hanging there, just hanging there from the ceiling light in the living room. And his face . . . Oh God.

Death follows New York City cop Eve Dallas everywhere—even on her honeymoon with Irish lover Roarke. When one of Roarke's employees is found dead, the post-mortem confirms suicide. An isolated case, or so Eve thinks.

But more suicides follow—strangers with nothing in common. The pathologist's report states each victim has an unexplained mark on their brain. Is this a genetic abnormality or a high-tech method of murder?

With the body count rising, Eve must delve into the world of virtual reality to hunt down a twisted killer. A killer who preys on the minds of the innocent.

Review:
I left it too long after reading to write a comprehensive review of Rapture in Death but I'm really loving this series. Eve and Roarke are a great couple and I've enjoyed seeing their relationship grow stronger since the beginning of the series. I do find that the murder mysteries are usually a little easy to guess (I'd pegged the killer in this book within a couple of pages of meeting them) but unusually that doesn't stop my enjoyment of these books, especially when the murders are so creatively committed that most people mistake them for suicide.

I like the futuristic world, Eve and Roarke are both brilliant multilayered characters who have deep dark secrets that we're only starting to get to the bottom of. I love the way the darkness in their pasts helps to bond them together and it's really interesting seeing Eve adjust to life as Roarke's wife. She's actually pretty happy and secure in her relationship now which is great to see. Side characters like Peabody add plenty of humour with their snarky comments and I'm enjoying getting to know characters like Mavis, Dr Mira and Feeney.

I'm still intimidated by the number of books that are already published in this series but the more of them I read the more excited I am that I have so many left to get through.