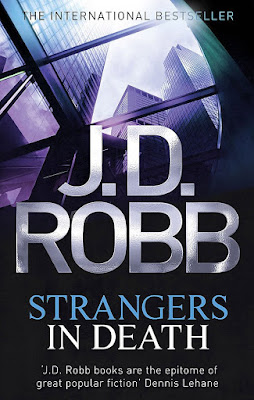 Murder harboured no bigotry, no bias. It subscribed to no class system. In its gleeful, deadly way, murder turned a blind eye.

Scandalous death sells papers. But as the media frenzy feeds on the wealthy Thomas Anders, strangled to death with a black velvet rope in his plush Park Avenue apartment, Lieutenant Eve Dallas grapples with one question: a crime of passion or a cold extermination?

Things don't add up. The victim didn't struggle and everyone has an alibi. And when a throwaway comment opens up a horrifying secret, Eve realises she's fighting for more than justice.

Review:
Twenty-six books in and I'm more addicted to this series than ever which is really saying something! Strangers in Death is a bit of a different case for Eve because she knows almost immediately who the killer is but has absolutely zero evidence to prove it. Eve has excellent instincts and she knows when someone is lying to her but they have an airtight alibi that Eve simply can't break. The deeper she digs the more she knows she's right but she still doesn't have enough to convince a jury. Could this be the one who gets away? Not if Eve and her team have anything to say about it they won't.

I will admit I'd guessed the twist to this story pretty early on but that didn't lower my enjoyment of watching Eve, Peabody and the others digging into the life of their suspect as they worked so hard to build a case against them. And the joy of seeing Eve kick butt in interviews just never gets old either. Throw in the romance between Eve and Roarke, the fun and colourful side characters and a huge new development for Charles and I couldn't put this book down. It always amazes me how quickly I devour the books in this series and I'm already dreading the day when I have to start waiting for new releases like everyone else. Luckily I still have about 20 books (plus extra novellas!) before I get to that point.