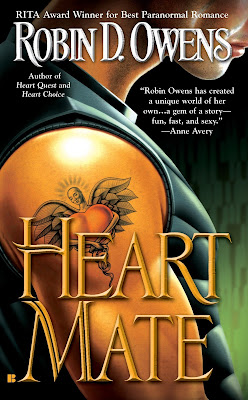 All his life, Rand T'Ash has looked forward to meeting his HeartMate, with whom he could begin a family. Once a street tough, now a respected nobleman and artisan, he has crafted the perfect HeartGift, which, in the custom of the psychically gifted population of the planet Celta, is the way a man finds--and attracts--his wife...

Danith Mallow is irresistibly drawn to the magnificent necklace on display in T'Ash's shop, but she is wary of its creator, despite an overpowering attraction. In a world where everyone is defined by their psychic ability, Danith has little, placing her at the opposite end of the social spectrum from T'Ash. But T'Ash refuses to accept her rejection and sees it as a challenge instead. They are HeartMates, but can T'Ash persuade his beloved to accept her destiny by his side?

Review:
HeartMate is the first book in Robin D Owens' Celta's Heartmates series. Set on the planet Celta sometime in the future most humans have at least a small amount of psychic ability known as Flair. Flair can take many forms, from telepathy to telekinesis right round to healing, but the more powerful your ability the higher your place in society.

Rand T'Ash is part of the top tier of society and he uses his Flair to create beautiful and intricate jewellery popular with wealthy clients. He may be rich and respected now but after his family was all killed in a fire he grew up in the slums and had to fight hard to survive. All he wants is to find his HeartMate and build a life with her, he's created the perfect HeartGift, a necklace that will only appeal to the woman he is meant to spend his life with.

All Danith Mallow has ever wanted is a family, she has very little Flair but she's happy with her small social circle and dating her best friend's brother. It may not be love but she already adores his family and is desperate to officially be one of them. When she spots T'Ash's HeartGift in his shop she's immediately drawn towards it but because she has very little knowledge of that kind of thing she thinks he's created some kind of magic bauble to lure women into his bed. She doesn't trust the new feelings she has and the last thing she needs is some overbearing man in her life telling her they belong together.

My friend absolutely loves this series so when I was staying with her recently she encouraged me to give it a try. It's the first book I've read by Robin D Owens and while it wasn't perfect I liked it enough that I want to try the next in the series. I think she's created a really interesting world, I like the different kind of Flair abilities, I enjoyed learning about the society and I absolutely LOVED the talking cat Zanth. He was my favourite character by far and I could totally see my own cat's attitude in everything he said and did.

While I did like both T'Ash and Danith and did eventually get invested in their relationship there were times when he was too overbearing and pushy for my liking and I felt like certain things came far too easily for Danith. I think I would have enjoyed it more if they'd talked things through more and if T'Ash had just been willing to back off a little when Danith needed space. I was happy with the way things ended though and I'm definitely curious about some of the side characters we've met so I'm looking forward to continuing the series.