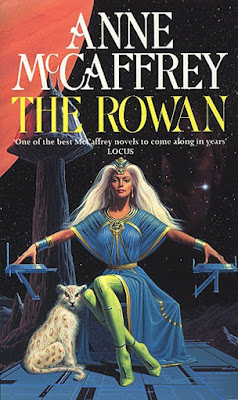 The first book in the Tower and the Hive sequence

The Talents were the elite of the Nine Star League. Their gifts were many and varied, ranging from the gently telepathic, to the rare and extremely valued Primes. On the Primes rested the entire economic wealth and communications systems of the civilised worlds. But Primes were scarce - only very rarely was a new one born. And now, on the planet Altair, in a small mining colony on the western mountain range, a new Prime existed, a three-year-old girl - trapped in a giant mud slide that had wiped out the rest of the Rowan mining community. Every Altarian who was even mildly talented could 'hear' the child crying for help, but no one knew where she was buried. Every resource on the planet was centred into finding 'The Rowan' - the new Prime, the first ever to be born on Altair, an exceptionally unique Prime, more talented, more powerful, more agoraphobic, more lonely, than any other Prime yet known in the Nine Star league.

Review:
I read quite a few of Anne McCaffrey's Pern books when I was a teenager but I've not read anything of hers in years so I was quite excited to give this series a try when my friend told me it was one of her favourites. I actually read this when I was visiting my friend back in June so I've really left it too long to write a comprehensive review but I did really enjoy the world that the author has created here.

Set in a distant future where humans have colonised planets across the universe some of us, known as The Talents, have developed all kinds of telepathic and other psychic abilities. These powers vary in strength and very few people are considered Primes, those capable of incredible feats. This is the story of The Rowan, the first Prime ever born on the planet Altair. She was born in a small and isolated mining colony and was discovered as a three year old child who was heard by every Talent across the planet telepathically screaming for help when the entire colony was destroyed in a landslide. The Rowan was the only survivor and she was taken in by the Prime living closest to her so that they could start her training young.

This story follows her journey throughout her childhood and into an adult as she learns to use her abilities. I enjoyed her story and watching her grow into a smart and fierce young woman and I really loved seeing her step forward as a leader as she grew in confidence. I'm definitely looking forward to continuing the series and seeing what happens next.