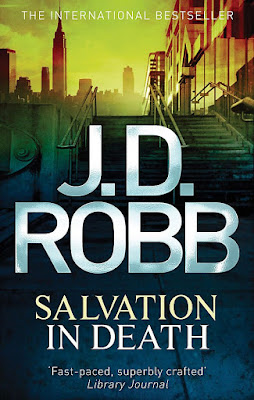 Seconds after partaking of wine during a Catholic funeral mass, Father Miguel Flores is dead on the altar. Detective Lieutenant Eve Dallas confirms that the consecrated wine contained enough potassium cyanide to kill a rhino. And though the East Harlem neighborhood is a long way from the stone mansion she shares with her billionaire husband Roarke, it’s the holiness flying around St. Christobal’s that makes her uneasy.

The autopsy reveals faint scars of knife wounds, a removed tattoo—and evidence of plastic surgery suggesting “Father Flores” may not be the man his parishioners thought. Now, as Eve pieces together clues that suggest identity theft, gang connections, and a deeply personal act of revenge, she hopes to track down whoever committed this unholy act. Until a second murder—in front of an even larger crowd of worshippers—knocks the whole investigation sideways…

Review:
You'd think it doesn't get much more shocking than a Catholic priest keeling over in the middle of a funeral service after drinking cyanide laced consecrated wine but when Eve starts digging a little deeper into his life things take an even darker turn. It turns out that Father Miguel Flores isn't Father Miguel Flores at all. As far as Eve can figure out someone stole his identity approximately 5 years ago, but why would anyone want to impersonate a priest? What could they possibly have to gain from it and how does it fit in with their murder? These are all questions Eve is trying to answer but then an Evangelical priest is killed in the middle of a live TV sermon and suddenly it looks like she might have a serial killer on her hands.

My love fest with the In Death series is definitely continuing, this story focused a little more on the murders and less on the personal lives of the characters but I didn't mind that. I always enjoy seeing how Eve's mind works and watching her dive into a complex case. She looks at the world differently to most people and puts together clues that most people don't even notice. Peabody has come a long way in her training but it's obvious there's still a lot more that she can learn from her partner. I'm totally invested in this world and the characters now, I love the glimpses we get of people like Mavis and Mira but more than anything I'm 100% here for every single interaction between Eve and Roarke. They're definitely a power couple and I love spending time with them both!