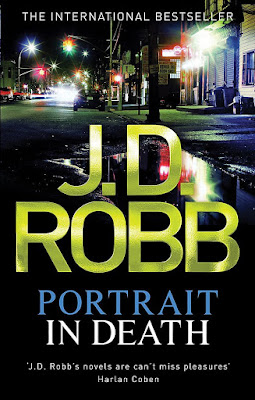 Her face was young and pretty, lips and cheeks rosy. 'She's dead isn't she? In this picture, she's already dead'

New York's top reporter is sent a glamorous portfolio - a beautiful girl in the prime of her life. But the camera lies. A closer look shows the girl's lifeless body held up by wires and clever lighting: immortalised and horrifying.

As the killer plucks more young people from their lives, Lieutenant Eve Dallas tries desperately to find a link. Trusting her instincts and her billionaire husband's shady past, Eve confronts the mounting panic.

But when a killer is consumed by a passionate madness, time is short . . .

Review:
I really do love this series more with every instalment which is pretty impressive now I'm 16 books in! Portrait in Death has some incredibly emotional scenes for Eve and Roarke as he's forced to face his past in much the same way that Eve was when she returned to Dallas a couple of books ago. It's fair to say that Roarke doesn't handle some shocking news about his past at all well and for the first time we see him pushing Eve away because he doesn't know how to deal with all the revelations. Roarke has often been a little too perfect to be true (not that that's stopped me falling head over heels for him!) so it was really great to see this more vulnerable side to him and to realise he's just as capable of making mistakes as Eve is.

It was also really wonderful to see Eve step up to the plate and be the support he needed, there have been many times in the series that Roarke has dropped everything in order to be by her side but this was the first time we saw Eve do the same and it really proved that she's in this relationship as much as he is. I just love them so much as a couple, they both have such incredibly messed up backgrounds but they understand each other perfectly because of that.

Of course alongside the fabulous relationship development we also have a murder mystery to solve but for the first time Eve has to let her colleagues take the lead for some of the time while she helps Roarke deal with his personal issues. It's been great to see Peabody growing in confidence throughout the series but I also love seeing characters like Mira and Feeny come to Eve and Roarke's aid. I think it's going to be a long time before I start getting bored of this world so I'm still very happy to have so many more books ahead of me.