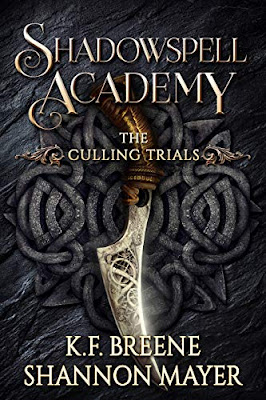 I had no idea how those words would change my life. Or how they’d changed my life already…

Until the day the most dangerous man I’ve ever met waltzed onto my farm and left us a death sentence.

My younger brother has been chosen for the prestigious, secret magical school hidden within the folds of our mundane world. A place so dangerous, they don’t guarantee you’ll make it out alive.

If he doesn't go our entire family will be killed.

The academy has already killed one sibling. I’ll be damned if they take another.

I do the only thing an older sister can: chop off my hair, strap on two bras to flatten the girls, and take my brother’s place.

Magic and monsters are real. Assassins are coming for me, and the dead are prone to rise. What’s a girl faking it as a boy supposed to do? That’s right—beat the academy at its own game.

Review:
The Culling Trials is the first book in the new Shadowspell Academy series by Shannon Mayer and K.F. Breene and it's kind of a cross between Harry Potter and Maze Runner with a hint of Mulan thrown in for good measure. We're introduced to main character eighteen year old Wild who has been helping to look after her family since her mother was killed and her father was badly injured. A few years ago her brother received a mysterious invitation to the Shadowspell Academy and although he passed the trials and won himself a scholarship he died in strange circumstances not long after starting school. Now an envelope has arrived for her younger brother Billy, only this time the invitation includes threats that if Billy doesn't attend the Culling Trials the whole family will be killed.

Wild already lost one brother and there is no way she's going to stand by and wait for another to be killed so she decides to go to the trials in Billy's place. After cutting off her hair and disguising herself as a boy she heads off to the Academy but what she finds when she arrives is nothing she could ever have prepared herself for. Magic is real but failing the Culling Trials could be a death sentence, and that's before she even starts taking classes. Joined by a ragtag crew of allies she makes along the way it's going to take everything Wild has to make it through the trials in one piece.

I was already a fan of K.F. Breene's writing but Shannon Mayer is a new author to me so I wasn't too sure what to expect from this story. I'm glad to say it was a very well written, fast paced and had me hooked from the first few pages. I still have a lot of questions about the world that the authors have created but I like the way things are unfolding so far and I'm already looking forward to the next book. Wild is a great character, she's protective of her family and she will do whatever it takes to keep her younger siblings safe but she's also at a complete disadvantage in the trials because her parents haven't prepared her at all for the possibility that magic is real. There are obviously a lot of secrets in the family that I'm sure we will uncover as the series continues but I really want to know more about the circumstances of her mother's death and how her father came to be badly injured.

Wild has already started making a few allies at the trials, some who seem more trustworthy than others, but it will be interesting to see how these friendships develop across the series. These friends are thrown together in dire circumstances and I think it will be the making or breaking of all of them. If the rest of the series is fast paced as the first book then I think we're in for a heck of a ride.