I know I'm not the only blogger who struggles to read all the books on their to read mountains, there are  just so many amazing books out there and not enough hours in a day to actually read them all. Anyway, I want to continue highlighting a few that are on my radar but I haven't quite managed to get to yet.

In the spotlight today is The Stars Unclaimed by Drew Willians, this is a debut novel and the first book in The Universe After series. I love Space Operas and this one has been described as "perfect for fans of Firefly" which immediately makes me want to read it. Book two, A Chain Across the Dawn, is publishing in May so I'm really hoping to start this one soon. 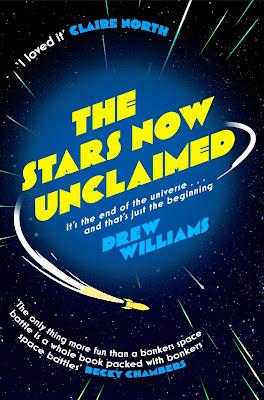 In an effort to save the universe, she just might destroy it. THE STARS NOW UNCLAIMED is the incredible debut by a brilliant new voice in science fiction, perfect for everyone who loves READY PLAYER ONE, STAR WARS, MASS EFFECT or just a really huge battle...

A century ago, a mysterious pulse of energy spread across the universe. Meant to usher in a new era of peace and prosperity, it instead destroyed technology indiscriminately, leaving some worlds untouched and throwing others into total chaos.

The Justified, a mysterious group of super-soldiers, have spent a hundred years trying to find a way to restore order to the universe. Their greatest asset is the feared mercenary Kamali, who travels from planet to planet searching for gifted young people and bringing them to the secret world she calls home. Kamali hopes that those she rescues will be able to find a way to reverse the damage the pulse wreaked, and ensure that it never returns.

THE END OF THE UNIVERSE

But Kamali isn’t the only person looking for answers to unimaginable questions. And when her mission to rescue a grumpy teenaged girl named Esa goes off the rails, Kamali suddenly finds herself smack in the centre of an intergalactic war… that she started.

AND THAT’S JUST THE BEGINNING

The Universe After series:
The Stars Now Unclaimed
A Chain Across the Dawn (May 2019)

Have any of you read The Stars Unclaimed already? If you have I'd love to know what you thought of it so please do leave me links to your reviews!
at 18:00