Today I'm taking part in the blog tour to celebrate the recent release of Queen of Sea and Stars, the second book in Anna McKerrow's Daughter of Light and Shadows fantasy series. I have an excerpt to share with you today but first let me give you a bit more information about the series.

Book 1: Daughter of Light and Shadows: 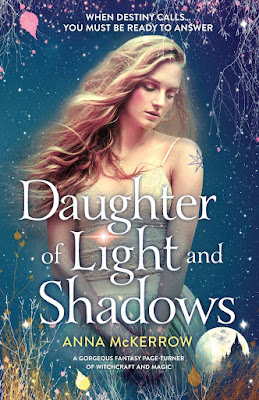 The stranger stood in the doorway, smiling as if he knew her. His blue-green eyes were transfixing: strange, luminous – like the sea on a cloudy day. Faye felt a sense of shifting, like standing on wet sand as the tide washed in, burying her deeper and deeper…

Faye Morgan – beautiful, independent and lonely – runs her family’s small shop of magical curiosities like her mother and grandmother before her. She longs for an escape, unaware of the dark power that flows through her veins…

When Faye casts a spell into the sea one cold morning, her call brings her to the attention of the wild and impulsive faerie king Finn Beatha. Finn pulls Faye into an intoxicating new world, both magical and treacherous… and as bewitching as Finn himself, who seems to command every part of her when he’s near.

As Faye’s passion for Finn grows, so does her fear that she might be there for some darker reason... and that she could be trapped in Faerie forever. Is there something in Faye’s past connecting her to this place, to Finn? And dare she find out more when every moment draws her further away from her old world?

Book 2: Queen of Sea and Stars: 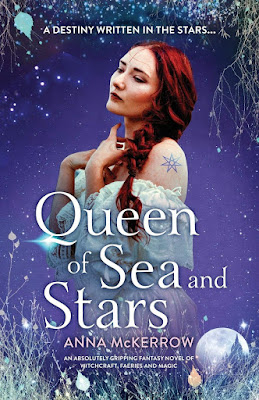 As a child, Faye Morgan was always an outsider, shunned for the ancient and powerful magic that runs through her veins.

Ever since she was a little girl, growing up in the village of Abercolme on the wild coast of Scotland, Faye Morgan’s life has been steeped in the old ways – witchcraft, herbal lore and a blood connection to the dangerous and unpredictable world of Faerie.

But magic is both a gift and a burden, and Faye has more than paid the price of living between two worlds. Neither accepted by the villagers, nor welcome in the Faerie Kingdom of Murias after rebuffing the fickle and attractive Faerie warrior king, Finn Beatha, Faye runs from Abercolme, hoping to leave that life behind.

However, even in the twisted, cobbled streets of London, Faye finds her blood bond with Faerie won’t be broken. A Faerie War of the Elements is brewing and, though she doesn’t yet know it, Faye is fated to play a terrible part. If she is to survive, she must learn to embrace her own dark power and face Finn Beatha once more… but in doing so Faye will discover secrets in her own past that never should have been disturbed.


Anna's brief description of Queen of Sea and Stars and the reason she chose to share this excerpt:

Faye Morgan, a hereditary witch, moves away from her tiny coastal village in Scotland to London to be with her new boyfriend, Rav. But though she hopes she can live a normal life in a new city, her blood bond to the realms of faerie can’t be denied. With a faerie war brewing, can Faye realise her destiny and discover who she really is? A tale of faery magic, desire and modern witchcraft.

I chose this, the first scene in the book, as an introduction to how Faye feels split between the faerie world and the ordinary one - and how the faerie world is not going to leave her alone.


Excerpt from Queen of Sea and Stars
by Anna McKerrow:


Her head against his, Faye opened her eyes to her reflection in the mirrors opposite. Some had the silvered appearance of old mirrors that had, perhaps, hung in decadent ballrooms or the powder rooms of grand houses. For a sudden moment, eyes that weren’t hers stared back at her, and she blinked; a shadow passed over the silvered glass, and a faint voice called her name. Faye Morgan, sidhe-leth. Faye, Faye. It was nothing. A trick of the light, she told herself. Your imagination.

She didn’t want the faeries here; she wanted nothing more to do with them. She’d left her shop, Mistress of Magic, and come to London to get away from the memories. You can’t haunt me here. Faye closed her eyes and murmured a protection spell. She slipped her hand into her pocket and rubbed the small mirror which she’d inscribed with a banishing sigil. Be gone, be gone, she thought fiercely.

‘You’ve really been spoiling me, since we got here.’ Faye took her seat again, cleared her throat and took a scone from the bottom tray of the cake stand, spreading it with jam and thick clotted cream. ‘I could eat cakes and tea for every meal, I think.’ She made herself enjoy its soft creaminess, seeking the grounding comfort of food. She knew that eating and drinking was one of the best ways to protect yourself against magic; to remind yourself, and the spirits that might choose to plague you, that you were blood and bone, heavy, resistant to their touch.

There had been other dreams, not only of Finn. Nightmares in which faeries dandled a baby she knew was hers in front of her, refusing her clutching hands.

‘If you want to come here every afternoon for cakes and tea, I’ll leave them my credit card details.’ Rav smiled. ‘They could reserve the Faye Morgan table for you. Near to the window and within earshot of the piano, but not too close,’

Faye was staring at the mirrors and hadn’t been listening.

‘I’m sorry. What was that?’ She made herself return to the room.

‘I was saying, you can come here any time you like. Are you okay, Faye?’ Rav’s gaze flickered to the mirrors and back at her.

‘Of course. I could be a lady who lunches. No. A lady who teas. It wouldn’t be very healthy, though, would it?’ She made herself sound chatty, smiled reassuringly at him. She didn’t want him thinking she was mad, or that she was tortured with nightmares of making a bargain with the faeries.

In the old folk tales, mothers left their ailing babies out for the faeries to take. Sometimes they would leave a fae child for the human mother to raise while they took the human child to live happily in the fae realm. It was an old exchange, fae for human, a symbol of the once-close relationship between the two realms. No-one believed in it any more, of course. But in her nightmares, faeries stole a child she didn’t yet have.

Doesn't it sound fabulous? I have to confess that I've not started this series yet but it sounds just like my kind of read so I can't wait to get started on Daughter of Light and Shadows!

Don't forget to check out the rest of the stops on the Queen of Sea and Stars blog tour for more excerpts and reviews: 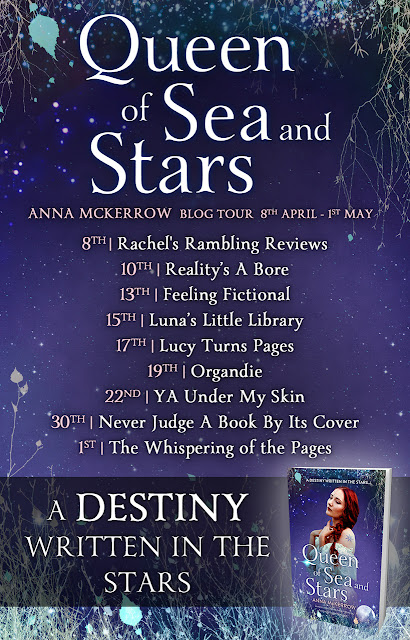