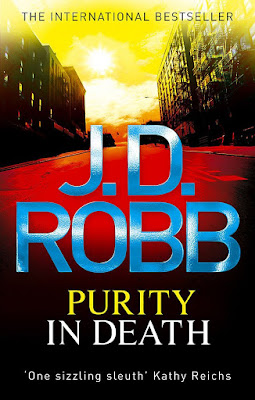 We seek only the purity of justice. By the time this message reaches you, the first execution will have taken place.

New York, the summer of 2059, and the unbearable heat drives everyone to the very edge of madness. So when homicide lieutenant Eve Dallas is called to a violent attack by a deranged man, she thinks she's in control. She couldn't be more wrong.

Someone is managing to spread insanity like a virus, forcing targeted criminals to lose their minds. But with a method of execution so unpredictable and brutal that even those behind it are starting to panic, Eve must act decisively.

Faced with a spiders-web of betrayal protecting those responsible, Eve is forced to fight back and fight dirty.

Review:
I've been reading these books so quickly that I really am running out of different ways to say how much I've come to love this world. There has to be something special about a series when you're 15 books in and you're actually excited that you've still got about 30 more stories to read before you catch up with the rest of the world and have to start waiting for new ones to publish.

I love Eve and Roarke, they've come such a long way as a couple and Eve in particular is still growing with every book. I've really enjoyed seeing her slowly start to let not just Roarke but also people like Peabody and Mira get close to her so that she now has a small but ever growing circle of friends and people she cares about. Eve definitely isn't the easiest person to get to know but there is nobody you'd want on your side more than her if you were in any kind of trouble. She's also a pretty awesome cop and I really enjoy watching her make the bad guys sweat in an interview, she knows exactly how to press their buttons and let them know they're about to go down for a very, very long time.

I found the concept of this story really fascinating, the way that someone had created a computer virus that actually infects the computer's user causing a slow and very painful death. It was a really creepy idea and I thought it was very well written. I actually had some sympathy for the group who created the virus because the people they were going after totally deserved to die. The targets were the lowest of the low, people who were pedophiles and sex offenders who had all managed to get around the law and avoid facing criminal charges, and honestly I had no problem with those people being killed. I think even Eve would have been tempted to let the murderers get away with it if their virus wasn't harming innocent victims along with the original targets!

Anyway, this book was right up there with my favourites from the In Death series and I can't wait to see who Eve is up against in the next instalment.