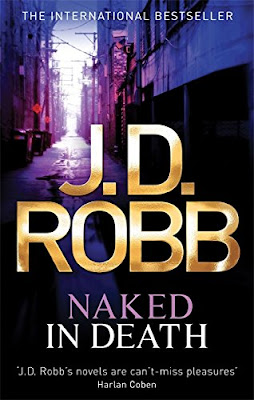 Named by the social worker who rescued her as a child, Eve Dallas is now a New York City cop who lives for the job.

While recovering from her latest case, Eve is sent to investigate the brutal execution of Sharon DeGlass. A high-class escort and senator's granddaughter, Sharon has been shot three times with an illegal gun and left naked and posed on her own bed.

All the evidence points Eve towards Irish billionaire, Roarke. With an instant sexual attraction between them, Eve and Roarke must work together to find a sadistic killer - but can Eve really trust a man whose past is as damaged as her own?

Review:
I've been hearing great things about J.D. Robb's In Death series for years now - in fact I think it was about 4 years ago that I actually bought my copy of Naked in Death! - but no matter how many friends have recommended it to me I kept putting off starting it. Mainly because it's such an intimidating series, let's face it the series is going from strength to strength with book 43 publishing later this year and that number doesn't even take into account the novellas and short stories! So it wasn't so much that I was worried that I wouldn't like this book but that I was terrified that I would, I mean who really has time to commit to a series of that length? But mainly due to some persistent nagging (thanks for that Aly!) I FINALLY bit the bullet and dove head first into this world and boy I'm glad I did. I just had so much fun with these characters and I'm excited that I get to spend so much more time getting to know them.

I'm not really sure if it's even worth writing a review of this book since pretty much everyone I know seems to have already read it and there are certainly no shortage of other reviews out there but I feel like I probably should though just in case you're one of those people who, like me, have been feeling intimidated by the series and wondering if it's really worth all the fuss it gets. I want to say categorically, based just on the first book, that yes, YES it is worth grabbing a copy of Naked in Death and I hope you end up enjoying it as much as I did!

Even though this book was first published just over 20 years ago it doesn't feel dated thanks to the futuristic setting J.D. Robb has created, the series starts in 2058 so it's not so far into the future that it feels alien but it's just far enough that the author is able to include some interesting technology and make her own rules regarding current laws etc. The setting is well done and we were given enough information to catch my attention without it feeling overwhelming. The focus of this story is definitely the mystery and I though that side was very well handled, it kept me completely hooked and I enjoyed seeing how Eve worked the crime scenes and slowly pieced everything together.

Eve is a tough, no nonsense cop who loves her job and wants to help people, she doesn't remember much about her childhood thanks to repressed memories but readers get a hint of the things she has been through in the form of flashbacks that she suffers. I'm sure there is a lot more left to learn but seeing the vulnerable side of her was quite heartbreaking and it makes me sick to think of the things that she's been through. Eve doesn't want sympathy though, she just wants to focus on the future and doing her job to the best of her ability. It seems like she has a tendency to use her work as a shield against her emotions and she can come across as a little cold at times but that quickly starts to change when she meets Roarke and he starts to get under her skin.

Roarke is a character I've heard so much about so I was really excited to meet him. He's a billionaire businessman with a bit of a shady past and it's hard to tell whether he's 100% on the right side of the law even now. He obviously has a code of honour and there are lines that he won't cross but I suspect that all bets are off when the people he cares about are in trouble. When Eve crosses paths with him it's because he's a suspect in her murder investigation and she's left feeling very conflicted by the attraction she feels towards him, she can't decide if he's really innocent or whether her hormones are leading her astray but at least she is aware of the way her feelings could be affecting her decision making. Roarke is the kind of character who really should raise loads of red flags, he's very possessive and definitely shows more than a few stalker tendencies that I would find REALLY off putting in a real life situation but somehow J.D. Robb pulls it off and she had me falling head over heels for him in spite of the warning signs. So much about him is still a mystery and I can't wait to dig deeper into his past and find out what makes him tick.

As we get to know him it becomes clear that Roarke is just as messed up as Eve and they understand each other on a level that people who don't have their experiences would never quite be able to achieve. As a couple they just work so although things to progress between them very quickly it didn't feel unbelievable. I do wish the author had taken more time to get them to this point of their relationship, considering the length of the series I think we could have had that delicious will they / won't they pull between them for at least a couple of books, but even though things have moved quickly they still don't know each other that well and I'm sure we're going to enjoy seeing them open up and share more of their secrets. In fact, I'd rather have them become a couple in the first book than have to deal with yet another dreaded love triangle so I'm not going to complain about the romance even a little bit!

Naked in Death is a fantastic start to this series and it's definitely left me eager to spend more time with these characters. I think my bank balance will suffer when I rush out and buy the rest of the series but I'm looking forward to having so many books to binge on!