Review: Beyond the Red - Ava Jae 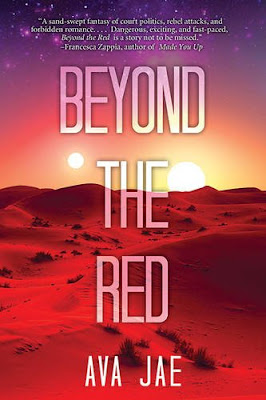 Alien queen Kora has a problem as vast as the endless crimson deserts. She’s the first female ruler of her territory in generations, but her people are rioting and call for her violent younger twin brother to take the throne. Despite assassination attempts, a mounting uprising of nomadic human rebels, and pressure to find a mate to help her rule, she’s determined to protect her people from her brother’s would-be tyrannical rule.

Eros is a rebel soldier hated by aliens and human alike for being a half-blood. Yet that doesn’t stop him from defending his people, at least until Kora’s soldiers raze his camp and take him captive. He’s given an ultimatum: be an enslaved bodyguard to Kora, or be executed for his true identity—a secret kept even from him.

When Kora and Eros are framed for the attempted assassination of her betrothed, they flee. Their only chance of survival is to turn themselves in to the high court, where revealing Eros’s secret could mean a swift public execution. But when they uncover a violent plot to end the human insurgency, they must find a way to work together to prevent genocide.

Review:
I've been really struggling to write this review because I had such high hopes for Beyond the Red and it just didn't live up to my expectations. I really liked the arid desert setting and I actually quite liked both of the main characters when they were apart but the second the two were thrown together things went downhill quickly and unfortunately that happens very early on in the story. What I wanted was more world building, I wanted to know more about the nomadic life the humans lived and I would have liked to have seen Eros spending more time with his family before everything went so horribly wrong. It all happened so fast that I never really felt invested in what was going on so no matter how tragic it was I didn't have the emotional connection I needed to be left heartbroken.

I also wanted to know more about the alien race Kora comes from, we learn very little of their customs or their history and there was just nothing that made them stand out as different to humans apart from that they're taller, faster, stronger and have weird markings on their skin. Instead of building a rich and detailed culture we get random words thrown at us that were either totally made up and used with very little explanation or were weird amalgamations of words we already use that just looked ridiculous (I wanted to throw my kindle every time I saw kinduv and that was repeated no less than thirty-seven times throughout the story but there were quite a few sortuv's too & I rolled my eyes at every single one of them).

It wasn't the world building that killed the story though, that honor goes to the most ridiculous case of insta-love that I've ever come across. To fully explain how crazy it was I'm really going to have to veer into spoiler territory so be warned if you decide to continue reading this review.

Let's just imagine you're Eros, you're a half human/half alien who was abandoned at birth by your parents and you've always been treated by an outsider by the humans you live with. The aliens believe half-bloods should be killed at birth though so you're lucky to still be alive and at least you've always been loved and respected by your adopted human parents, their son and his family. Now try to imagine the aliens invading your camp and brutally murdering over 200 humans, including most of the family you adore, right in front of your eyes. All this before you are taken captive alongside over 60 women and children, you are all humiliated, beaten and abused, stripped of your clothing and completely dehumanised before being permanently branded as a slave. Everything that happened to you and your people was done under orders from the alien queen Kora, something she never denies and never really apologises for.

So now you're a slave with no rights and with no choices and Kora decides that her personal guard can't be trusted so of course it makes perfect sense for her to make a reviled half-blood - someone who knows that she was responsible for the slaughter of the family who loved and raised him! - her bodyguard. If you don't agree she will have you sentenced to death so I can't really blame you for going along with it, especially since it gives you the chance to help some of the survivors of the attack, but surely you'll never feel anything but hate for the woman who destroyed your entire life? Surely you won't spend your entire time trying not to notice her beauty or the sexy curves she reveals when she undresses in front of you? Surely you wouldn't climb into her bed to comfort her when she has a nightmare the very first night you are forced to stay in her room? Surely you'd be angry and bitter and resent every moment of time you spent with her? Well apparently not in this case because Eros does all of those things and more!

I could have probably got on board with the romance if it had been done slowly, if we had seen Eros and Kora gradually get to know each other, if they had taken time to talk about what had happened to Eros's family and the entire tribe that raised him, if Kora had admitted making mistakes and had apologised and tried to find a way to make things right. If that had happened BEFORE Eros started mooning over her I might have believed it but it didn't. Okay it takes a lot longer to get to the kissy kissy stuff, and to be honest there isn't an epic romance between them yet but their thoughts around each other are just totally unbelievable and unrealistic from the minute they meet and that totally goes both ways.

Don't even get me started on the issue of Kora announcing that a half-blood is going to be her new bodyguard and nobody questioning it, I'm pretty damn sure that her court would make sure she was chaperoned around her male guards too and I don't think there's any way in hell that her brother (the captain of her guard) would let her spend time with Eros alone. She may be the queen but nobody listens to her when she makes any other kind of decision so I doubt she'd get her own way here and I can't really see why she'd want to. It just doesn't make sense.

This review is already pretty long but there are still a couple of things that I really feel I have to mention. There is a second completely unbelievable case of love at first sight when a prince arrives offering Kora a marriage contract, I mean why have one case of insta-love when you can have two and make it an insta-triangle? Because we all know how much readers love triangles! What about including attempted rape? Obviously the threat of being executed for treason isn't enough when you can remind girls everywhere that there are fates worse than death. I absolutely HATE the use of attempted rape as a way to add danger to a story, there are a million other ways you can go without using it as a cheap plot device as a way to raise tension, especially if it has no further impact on the plot or any of the characters.

I feel like I've really ripped this book to shreds which is awful because I hate writing negative reviews but this story had so much potential and it just could have been so much better. There must have been something going for it because I did keep reading until the end and I actually read the whole book relatively quickly because it was very fast paced and had plenty of action going on but the negatives far outweigh the positives and I have to be honest about that. I have to warn you that there are a lot of unanswered questions at the end too, it resolves a few things but it's quite a major cliffhanger considering we have no confirmation of a sequel. I can pretty much guess how things would play out so I'm not too bothered by the lack of resolution and to be honest I doubt I'd read a second book even if one is published but I think it's worth being aware of before you pick up the book.