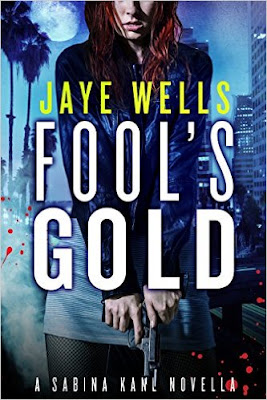 In the 1970s, Sabina Kane was a rookie assassin looking for first big kill. But when the day finally comes to prove her skills to the Dominae, she finds herself shadowing Slade Corbin, a more experienced assassin with a huge chip on his shoulder. Together, they must track down a blackmailer who's threatening to expose the existence of vampires to the world. Will Sabina and Slade be able to find the blackmailer in time, and, more important, will they be able to get through the mission without killing each other?

Review:
Fool's Gold is a short prequel novella to the Sabina Kane series that gives readers a bit more insight into Sabina's past and her first job as an assassin. Sabina aced her assassin training and came out top of all her classes but in spite of that her half-blood status has always been held against her. While her other classmates were all able to get straight to work Sabina has been palmed off with easy enforcer work because the Dominae don't trust her with anything more complicated.

She's finally being given a chance to prove herself though, someone is threatening to out vampires to the human population unless the Dominae pay him a crazy amount of money. Of course they should have known better because the Dominae were never going to pay blackmail money when they have a team of assassins they can send to get rid of the problem. Sabina has been teamed up with their top assassin Slade to work on the case and if she can prove to him that she's capable then she'll be able to begin working as an assassin full time.

I'm not going to say anything more about the plot but this was a fun story and I liked the fact that it was set in the late 70's, it made for an interesting change of pace compared to the first book in the series. I'm assuming that Slade is a character that we'll meet again later on (I've currently only read the first book: Red-Headed Stepchild so know he wasn't in that book) and after the way things were left at the end of this story the next meeting between him and Sabina should be interesting to say the least. I'm actually quite looking forward to seeing that happen so I'll be very disappointed if he doesn't show up again!

I'm glad I read this story, it was nice to learn more about Sabina's past and it's even easier to understand why she has such a big chip on her shoulder now. I did miss Giguhl but there were still some funny and light hearted moments provided by a different sidekick that goes by the name of Satan.