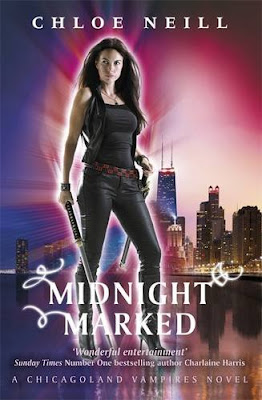 Merit is one of Chicago's most skilled vampire warriors; these days, she doesn't scare easily. But she and Master vampire Ethan have made a new and powerful enemy, and he won't give up until he owns the Windy City.

With his last plan thwarted, he's more determined than ever to watch Cadogan burn. Ethan has put the House's vampires on high alert, but their enemy will stop at nothing, including pitting vampire against vampire.

In this deadly game of cat-and-mouse, the stakes are life or death - and winning might mean sacrificing everything . . .

Review:
I'm such a fangirl when it comes to this series, Merit is awesome, Ethan was chained in my book boyfriend harem years ago and I absolutely love all the side characters we've met along the way. It's kind of amazing to think that all of the events of the last 12 books have been crammed into one, very action packed, year of Merit's life. That's right, she's just now getting to celebrate one year of being a vampire and you can trust Ethan has big plans for her!

Merit and Ethan have both come such a long way since we first met them. Merit has come into her own since she was turned, she is now a fierce warrior and she's really come to care for Cadogan House and all of the vampires who are now part of her extended family. I wouldn't say Ethan has mellowed because that guy is still as alpha as it gets but he has learned to trust Merit and he's even able to admit when he's in the wrong which is quite an achievement really considering the unapologetic arse he could be at the beginning of the series! As a couple they still have their ups and downs and when they're arguing the whole world knows it but they no longer walk away when things get tough, instead they hash things out like rational adults and they're both secure enough in their relationship to know that they'll be able to deal with any problems that are thrown at them. I'm enjoying seeing this more mature side to them but I'm hoping we don't see them become too settled - I like a bit of spice just to keep things interesting!

In Dark Debt we finally found out who the mastermind behind a lot of their recent troubles is but knowing it and proving it are two very different things and they're a long way from having any evidence against them. I'm sure you didn't expect the mastermind to sit back and wait for them to come to him though and he's definitely bringing his A game in this instalment. In fact, if Merit and the others aren't able to stop him it'll have dire consequences for the whole of Chicago.

Merit and Ethan have worked hard to build up a working relationship with the Gabriel and the NAC Pack and that is all threatened when a vampire murders a shifter and they're the first on hand to find the body. Some of the shifters have just been looking for an excuse to start a war and now they're all on very dangerous territory if Merit can't prove they had nothing to do with the death. As the bodies start to pile up and old enemies come crawling out of the woodwork our favourite characters are all really up against it in Midnight Marked.

I don't want to say too much more about the plot but this series continues to be one of my favourites and I'm loving the direction things are taking. We get some really interesting developments in their fight to save Chicago and some completely swoon worthy moments between Merit and Ethan so I'm very happy with the way things turned out here and I'm already looking forward to the next instalment. 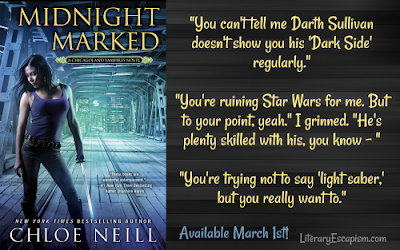