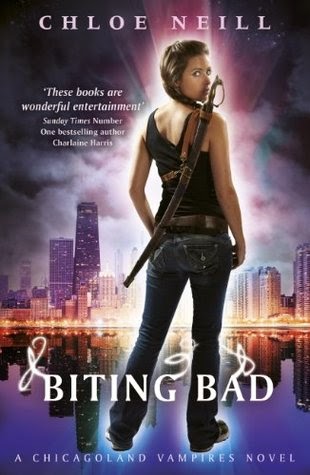 Merit has been a vampire for only a short while, but she's already seen a lifetime's worth of trouble. She and her Master, centuries-old Ethan Sullivan, have risked their lives time and again to save the city they love. But not all of Chicago is loving them back.

Anti-vampire riots are erupting all over town, striking vampires where it hurts the most. A splinter group armed with Molotov cocktails and deep-seated hate is intent on clearing the fanged from the Windy City come hell or high water.

Merit and her allies rush to figure out who's behind the attacks, who will be targeted next, and whether there's any way to stop the wanton destruction. The battle for Chicago is just beginning, and Merit is running out of time.

Review:
Just when the Cadogan vampires get one run in with the GP out of the way things in Chicago start to heat up thanks to a new anti-vampire group that has sprung up out of nowhere. The group are trying to spread fear amongst the human population by causing riots but they are also using the mass hysteria as a cover for the attacks they have planned on important vampire resources in the city. They start with the Blood4You factory but quickly moving on to target Grey House leaving the vampire population facing both food and housing shortages. The GP aren't done with their threats either and rather than focus on helping the vampires from Grey House they're too busy trying to make life difficult for Ethan. Cadogan House may have walked away from the GP but they would never leave Chicago vampires unprotected and willingly open their doors to the homeless Grey House members but that only causes even more friction. It's up to Merit and her Red Guard partner Jonah to figure out who is behind the attacks before the situation escalates and puts even more lives at risk but can they resolve things without more bloodshed?

I love this series and I'm really pleased to see how far Merit and Ethan have come since the first book. Their relationship has had plenty of ups and downs but we finally seem to be at a point where they are able to trust in each other and talk through their problems rather than bicker and fight with each other. As much as I enjoyed the push and pull of their earlier interactions it now feels like they're a steady couple and it's easy to believe that they'll make it for the long haul. They still have fantastic chemistry and Merit isn't afraid to speak up when she thinks Ethan is in the wrong but he respects her for that and knows she will always do her best for Cadogan House. Merit has been through so much since the first book and I've loved seeing her grow into a kick ass warrior, I have to say I like the fact that even though she is strong she isn't invulnerable though. She does make mistakes and she can be hurt so she needs to know that the other guards have her back.

I was happy to see that Jonah has started to move on from his crush on Merit, as much as I loved his character I was worried for a while that there might be a love triangle thrown into the mix and I'm glad that this isn't the case. I'm also pleased to see that Mallory has continued to make amends to both Merit and Catcher for her previous actions. It'll take a long time before any of them fully trust her again but she's making steps in the right direction which is good news for everyone concerned. She still has the potential to go off the rails but I'm hoping she's put the worst of it behind her now and is ready to move onto a more positive phase of her life.

There is a lot going on in Biting Bad and I really enjoyed the investigation into the riots and the attacks on the Chicago vampires. While there is plenty of action I think this story was probably a little more focused on Merit and Ethan's relationship and there is a lot of set up going on for future books in the series which makes this seem a little slower paced at times. I don't mean that in a bad way though and there is still plenty of the humour that I expect from these stories. After that cliffhanger ending I'm definitely looking forward to seeing how things play out in the next book too.