Review: Captivated by You - Sylvia Day 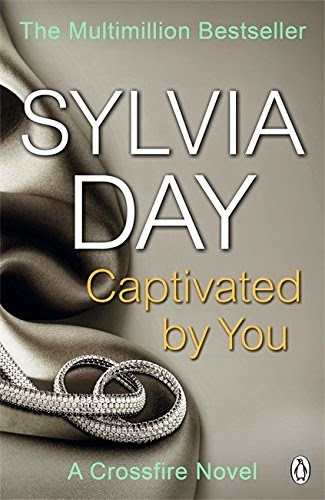 Gideon calls me his angel, but he's the miracle in my life. My gorgeous, wounded warrior, so determined to slay my demons while refusing to face his own.

The vows we'd exchanged should have bound us tighter than blood and flesh. Instead they opened old wounds, exposed pain and insecurities, and lured bitter enemies out of the shadows. I felt him slipping from my grasp, my greatest fears becoming my reality, my love tested in ways I wasn't sure I was strong enough to bear.

At the brightest time in our lives, the darkness of his past encroached and threatened everything we'd worked so hard for. We faced a terrible choice: the familiar safety of the lives we'd had before each other or the fight for a future that suddenly seemed an impossible and hopeless dream . . .

Crossfire Series:
Bared to You (2nd Read Review)
Reflected in You
Entwined with You
Captivated by You
One with You

Review:
Fans have had to wait a long time for this latest instalment to the Crossfire series and with long waits come high expectations. I have to admit that as much as I loved the first 2 books in the series I was a little disappointed with book 3 so although I was looking forward to Captivated by You I wasn't quite as desperate as I had been with the last two books. In fact, this is the first time I hadn't reread the previous books just before the new release and I think that actually went in my favour. Since it's been well over a year since I read about this couple I was excited to spend time with them again, I enjoyed revisiting them and although the story is pretty much a repeat of the previous books in terms of drama and constant sex that didn't actually bother me this time around. Unfortunately I think anyone who has read the other books more recently are probably in for a little disappointment though.

Really I think Sylvia Day could have wrapped this up Gideon and Eva's story in three books, lets face it, the only reason to extend this to a series of 5 books was for the money. I think she would have been better off sticking with a trilogy and then writing a few spin offs about some of Gideon & Eva's friends. I would happily read a book about Cary or Ireland and either of those characters would have allowed us to revisit Gideon & Eva without them having to be the main focus of the story. As it is we've got a series that has been extended by a lot of unnecessary drama. Captivated by You finds Gideon and Eva plagued by ex partners (on both sides) who want to split them up and family members who either completely deluded or deliberately malicious. We also once again see Gideon and Eva having trouble communicating with each other in any meaningful way outside of the bedroom. We're now in the fourth book and they STILL use sex to resolve all of their issues which is getting more than a little frustrating. Thankfully that finally seems to be starting to change by the end of this book but in some ways it is a case of too little too late and I know plenty of readers will be really irritated by one particular turn of events.

I know that I've spent most of this review complaining so far so you're probably wondering why on earth I've given the book a 4 star rating but in spite of my issues Captivated by You is incredibly readable. I love this couple, they are dysfunctional and messed up and have more issues between them than they know what to do with but I love reading about them. They have fantastic chemistry, the sex scenes are always hot and perversely I was complaining about too little sex in this book when I'd been annoyed by too much of it in Entwined with You! I enjoyed getting half of the story from Gideon's POV, it feels like we're finally getting inside his head a little, learning what makes him tick and why he behaves in the way he does, and I'm glad that Eva is learning to stand her ground and fight for what she wants a bit more. This is a book I could have happily devoured in one sitting if life hadn't got in the way and as it was I ended up having 2 extremely late nights because I kept allowing myself "just one more chapter" over and over again before I eventually turned out the lights.

Do I think this series was extended unnecessarily? Yes. Was I frustrated by the number of issues thrown at the couple in this book, especially when we didn't get a resolution to any of them? Absolutely. Will I be reading the next book anyway? You can bet your life I will be! Syliva Day has created characters that I'm incredibly invested in, I want to see them get their happy ending and I want to see how things turn out for Cary and their other friends and family members too. I just hope we don't have such a long wait for the conclusion of the series and I really, REALLY hope that the final book focuses on resolving the issues they're already facing rather than adding more drama to the mix.