Review: Entwined with You - Sylvia Day 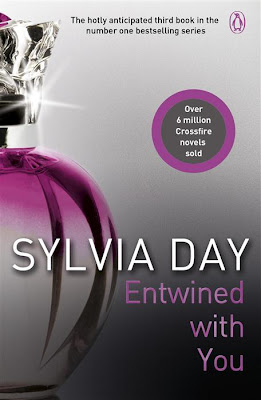 From the moment I first met Gideon Cross, I recognised something in him that I needed. Something I couldn't resist. I also saw the dangerous and damaged soul inside - so much like my own. I was drawn to it. I needed him as surely as I needed my heart to beat.

No one knows how much he risked for me. How much I'd been threatened, or just how dark and desperate the shadow of our pasts would become.

Entwined by our secrets, we tried to defy the odds. We made our own rules and surrendered completely to the exquisite power of possession . . .

Crossfire Series:
Bared to You (2nd Read Review)
Reflected in You
Entwined with You
Captivated by You
One with You

Review:
I have been a huge fan of the Crossfire series ever since I first read Bared to You so it feels like I had to wait forever for Entwined with You to finally be released. Gideon and Eva are my favourite dysfunctional couple and I have to admit to having a huge crush on Gideon so I was excited to spend more time with them both. I was a bit nervous when I discovered that the series had been extended from the trilogy originally planned into a five book series though, I was worried that there wouldn't be enough story to fill that many books and that we'd end up with a couple of filler books. It remains to be seen how much there is to learn in the next two books but I enjoyed this latest instalment and will be at the front of the queue for Captivated by You when it is released.

In the previous book we saw exactly how far Gideon is prepared to go to keep Eva safe but now he is facing the fallout. Not only does he have to try and come to terms with what he did but he also has to make sure nothing can be pinned on him and he can only hope that it doesn't change the way Eva looks at him. He is pushed into taking extreme measures to keep his secret and it shows just how far his and Eva's relationship has progressed when she is able to trust him no matter how bad things look. Their relationship still isn't perfect by a long shot but things are better than they ever have been. I really want to see the pair of them talk to each other more rather than constantly using sex as a way of communicating but it was good to see them start to get a handle on their jealousy issues and have a little faith in each other.

One thing I think I missed was the conflict that was so prevalent in previous books, there are things that happen that could have added more drama to the story but on the whole they were handled much more quickly and with a lot less stress than before. This is partly because of the growth that both Gideon and Eva have gone through but it does make for a less dramatic read and lets face it one of the reasons we love this couple so much is because of the drama! I never thought I'd hear myself say this (especially about an erotic romance novel) but I actually reached the point where I started to get bored of the constant sex scenes. As you'd expect from Sylvia Day the scenes were all well written and incredibly hot but there are only so many ways to describe inserting tab A into slot B before it starts to get a little repetitive. Gideon is still one of the sexiest literary heroes I've come across so I don't want to lose the sex scenes completely but I'm hoping to see a little less of them in the next book and I'd love more focus to be on the couple spending time together outside of the bedroom.

I was really pleased that we have finally started to learn a little more about Gideon's past, we are still left with plenty of questions about what happened to cause his nightmares but it was nice to get a few answers. I found myself getting incredibly annoyed with his mother in this book which surprised me because she has always seemed so nice before. Her attitude and behaviour was completely out of order this time around so it was nice to see Eva stand up for her man. I'm hoping for some kind of showdown with Eva's mother in the future too because she is driving me crazy with the way she stalks Eva, the way that everyone just panders to her only makes her behaviour worse. Then you have the side story with Cary that shocked me and made me want to shake some sense into him! I still can't quite believe what he's got himself mixed up in this time and I'm really hoping that he sorts himself out soon.

Although Entwined with You wasn't my favourite book in the series it was still a great book and I'm happy to have had my much needed Gideon fix. I'm glad that the story didn't end with a huge cliffhanger so as much as I'm looking forward to the next instalment I'm not quite as desperate to get my hands on it as I was this one. It will be interesting to see what the future holds for Gideon and Eva and I find myself feeling happy that we have another 2 books to look forward to.