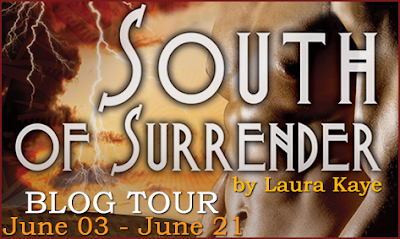 As a huge fan of Laura Kaye's Hearts of Anemoi series I'm thrilled to be taking part in the blog tour to celebrate the release of the 3rd book in the series South of Surrender. This is a fabulous paranormal romance series and I think Chrys might just have been my favourite hero so far, I'll be posting my full review later today but in the meantime let me give you a bit more information about the book. 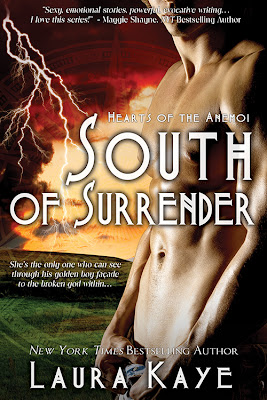 Chrysander Notos, Supreme God of the South Wind and Summer, is on a mission: save Eurus from his death sentence and prove his troubled brother can be redeemed. But Eurus fights back, triggering vicious summer storms that threaten the mortal realm, dangerously drain Chrys, and earn the ire of the Olympic gods who ordered Eurus dead.

Laney Summerlyn refuses to give up her grandfather’s horse farm, despite her deteriorating vision. More than ever, she needs the organized routine of her life at Summerlyn Stables, until a ferocious storm brings an impossible—and beautiful—creature crashing down from the heavens.

Injured while fighting Eurus, Chrys finds himself at the mercy of a mortal woman whose compassion and acceptance he can’t resist. As they surrender to the passion flaring between them, immortal enemies close in, forcing Chrys to choose between his brother and the only woman who’s ever loved the real him.

Hearts of the Anemoi Series:
North of Need
West of Want
South of Surrender
East of Ecstasy (2014) 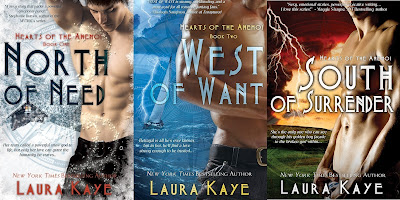 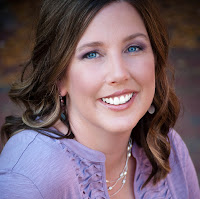 Author Bio:
Laura is the New York Times and USA Today bestselling author of a dozen books in contemporary and paranormal romance. Growing up, Laura’s large extended family believed in the supernatural, and family lore involving angels, ghosts, and evil-eye curses cemented in Laura a life-long fascination with storytelling and all things paranormal. She lives in Maryland with her husband, two daughters, and cute-but-bad dog, and appreciates her view of the Chesapeake Bay every day.
Website | Blog | Facebook | Twitter | Newsletter Sign Up

Now please give Laura Kaye a very warm welcome to Feeling Fictional! She's here to tell you all about South of Surrender and she is holding a couple of fab giveaways so make sure you enter them both!


7 Reason to Try South of Surrender by Laura Kaye

I’m thrilled to be wrapping up my blog tour celebrating the release of South of Surrender here at Feeling Fictional! South of Surrender is my tenth published novel and the third in my Greek-mythology-inspired Hearts of the Anemoi series, and it was a total blast to write. Today, I thought I’d share seven reasons to give South of Surrender a try, even if you haven’t read the first two books in the series:

7. Most of the reviews are coming down on the side of South of Surrender being successful as a stand-alone novel, meaning you don’t have to have read North of Need or West of Want to get what’s going on and follow along. So you can jump into bed with Chrysander now! LOL

6. Most battle scenes of any book I’ve written. South of Surrender is filled with battle scenes between the gods and in some cases involving mythological creatures, too. They were a blast to write.

5. Biggest character ensemble I’ve ever used in a book. In addition to the main romantic couple of Chrysander and Laney, there are several dozen other characters in South of Surrender, most playing only a minimal part. But what I think this really adds is depth to the worldbuilding and the mythology.

4. South of Surrender will make you feel. In fact, I dare you not to get teary! LOL I have never bawled so hard as I did while writing a scene in this book. You’ll know the one…

3. Some of the hottest sex scenes I’ve written. If you thought my other books were hot, South of Surrender blows most of them out of the water in terms of sexual tension and downright heat in the sex scenes themselves. You gotta read to believe! LOL

2. Admirable, kick-ass heroine. She might be nearly blind, but Laney Summerlyn doesn’t let anyone push her around. Her strength makes me wish I knew her as a real person!

1. Alpha hero in the form of a summer god! Chrysander Notos is the Supreme God of the South Wind and Summer, and he is hot. Literally! Alpha, immortal, dominant, mmm! What better hero for a summer read?

GIVEAWAY: Have you read any of the books in this series yet? If so, share a favorite scene from any of them (North of Need, West of Want, South of Surrender)! If not, feel free to ask a question! One commenter who leaves their email address will win a Hearts of the Anemoi tote bag and tons of swag! Open to international! Good luck!

Also enter the Rafflecopter before it’s too late for a chance at the overall grand prizes to be picked on June 22!

Visit all the stops on the South of Surrender Blog Tour for more ways to win!

Thank you for a fabulous guest post Laura! I'm having a hard time picking my favourite moments from the series but you already know how much I adore Owen (from North of Need) and his ice cream addiction! There was a particular scene where he is in a little igloo he's built in Megan's garden and she introduces him to the joys of snow cones which stands out in my mind. To be honest I have loved each of the heroes in this series, the way Zeph cares for Ella after she is injured in the storm he inadvertently started (in West of Want) and the way Chrys is so utterly dominant in the bedroom - they're just all completely swoon worthy LOL.

You have 2 chances to win prizes so make sure you enter using both of the rafflecopter forms below.

Giveaway 1:
This is a tour wide giveaway where 3 lucky winners will each receive a $100 gift card of their choice (Amazon, B&N or iTunes). A 4th winner will receive signed copies of all 3 books in the Hearts of Anemoi series (I know which prize I'm hoping to win - I LOVE signed books!). Winners will be announced and contacted directly by Laura Kaye.


Giveaway 2:
The second giveaway is only available at this stop on the blog tour and one lucky winner will receive a Hearts of the Anemoi tote bag and tons of swag.
a Rafflecopter giveaway