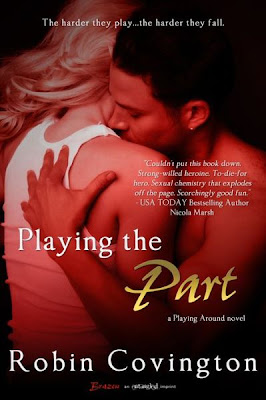 After publicly self-destructing over a heartbreak a year ago, best selling romance writer Piper James is now making nice with her publisher by agreeing to teach Hollywood's favourite action star how to act like he's in love. Only playboy Mick Blackwell has no clue what love looks like.

When a seductive heat ignites between Piper and Mick, she jumps at the chance for a bit of fun between the sheets, but with two stipulations: she's kept out of the public eye and things end when she returns to New York. Only Mick keeps changing the rules on her. Tempted by America's favourite bad boy, Piper is wondering how far she's willing to bend...

Review:
Romance author Piper has been on shaky ground with her publisher ever since she had a very public meltdown after finding out her famous boyfriend was cheating on her. She has sworn off men and is struggling to find her muse to finish her latest book even though her deadline is looming. Her only hope of getting back into her publisher's good graces is to act as a consultant on the set of the movie adaptation of one of her previous stories. Mick is famous for his action movies but he wants to try his hand at something more serious and he needs to prove his acting abilities as the romantic lead in his latest role. As a well known play boy with a love them and leave them attitude he has never been in love and it shows on screen. Piper has been tasked with teaching Mick to act like he's in love but the last thing she needs is to get close to another bad boy actor. She was burnt before and no matter how attracted she is to Mick she isn't prepared to put her heart on the line again. Surely a little harmless flirting won't hurt though?

I'm a massive fan of Robin Covington's Boys are Back in Town series (A Night of Southern Comfort & His Southern Temptation) and I love Entangled's spicy Brazen imprint so I jumped at the chance of reading Playing the Part when I was offered a review copy. I have to say I think that Mick might be Robin's hottest hero yet and anyone who has read any of her previous books will know that is quite an achievement! I love the way this author always manages to blend humour into her stories along with realistic, likeable characters who are easy to relate to, and sexy, believable romances. Her books have me laughing one minute and fanning myself the next and they always leave me with a satisfied smile on my face.

Piper is the kind of girl most of us can relate to, she has had her fair share of heartbreak and it was made even worse by the fact it was all so public. She was rightly angry and distraught after catching her fiancé cheating but the press turned on her and made her seem crazy rather than the innocent victim that she really was. Mick is the kind of guy who draws her like a moth to the flame but she knows she can't trust him with her heart. The last thing she wants is to draw the attention of the media again - she's had more than her fill of cameras and journalists and it is something she never wants to go back to. All she wants to do is try and salvage her career and live her life in the shadows. Mick has the same kind of playboy image her ex fiancé did and he has the arrogant attitude to match his good looks. He makes it no secret that he wants Piper and she finds him almost impossible to resist. She is determined to protect herself though so she puts very specific rules in place when she agrees to have a fling hoping to get him out of her system. All she is interested in is hot sex - no commitment, no sleeping over, no being seen together in public and under no circumstances can the press get wind of what is going on. Her demands seem ideal to Mick, the last thing he has in mind is tying himself down to one woman no matter how sexy she is. The trouble is that the more time he spends with Piper the more convinced he becomes that there could be something special between them. Can he convince Piper to give him a chance to win her heart?

I'll admit that I wasn't sure if I was going to like Mick when we first met him, he has such a cocky attitude and I thought he was going to be too arrogant for my tastes. Thankfully it doesn't take long to discover a sweeter side and you start to see that his attitude is more for show than anything else, he has created the persona that he thinks people expect from him but when he is alone with Piper you get to see the real Mick. The chemistry between them was hot as hell but they also take time to get to know each other outside of the bedroom and uncover each other's secret fears and desires. I believe that this is the first book in a new series and I have high hopes that Mick's room mate - who happens to be an incredibly sexy rock star - might be up next (well, I'm keeping my fingers crossed anyway!). Robin Covington is definitely on my list of must read authors and I will be recommending all of her books to any contemporary romance fans. If you like your romances spicy then Playing the Part should definitely be on your wish list. 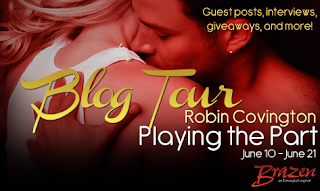