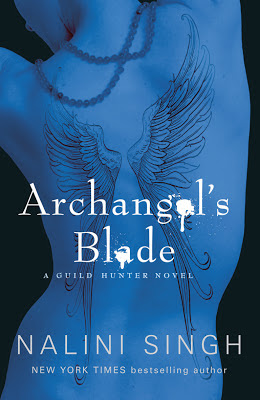 The severed head with a distinctive tattoo on its cheek should have been a Guild case, but dark instincts honed over hundreds of years compelled the vampire Dmitri to take control, There is something twisted about this death, something that whispers of centuries long past . . . but Dmitri's need to discover the truth is nothing compared to the strength of his response assigned to decipher the tattoo.

Savaged in a brutal attack that almost killed her, Honor is nowhere near ready to come face to face with a seductive vampire who wears his cruelty as boldly as his lethal sensuality . . . the same vampire who has been her secret obsession since the day she was old enough to understand the inexplicable, violent emotions he aroused in her.

As desire turns into a dangerous compulsion that might destroy them both, it becomes clear that the past will not stay buried. Something is hunting, and it will not stop until it brings a blood-soaked nightmare to life once more . . .

Review:
I am a huge fan of the Guild Hunter series but I'll admit I was a little nervous about reading Archangel's Blade. This is the first story that doesn't focus on Raphael and Elena and I was a worried that I wouldn't enjoy it as much - especially since I've never been the biggest fan of Dmitri. I'll admit he had grown on me a bit since the first book but he has always come across as so cold and I wasn't sure how I'd like him as the hero. I should have know that Nalini Singh wouldn't disappoint me though and as much as I still find him quite a scary character and definitely someone you wouldn't want to get on the wrong side of I had fallen head over heels for him by the end of this book.

Dmitri is the kind of guy who takes what he wants and makes no apology for it, he is all hard edges and arrogance - definitely not your typical hero. There is a reason that Raphael trusts him to lead his seven and it's because he has the ruthlessness needed to make even the older and most dangerous vampires and angels fear him. No, Dmitri isn't the kind of guy you'd want to cross but he is exactly the kind of guy you'd want on your side in a fight. What I loved most was seeing into his past and getting to know the human Dmitri used to be, he didn't choose to be turned into a vampire and the way it happened and the things he lost are what turned him into the man we know today. 1,000 years ago you would have met a totally different person, that Dmitri was sweet, romantic and head over heels in love with his wife and family. My heart absolutely broke for everything he had been through and it was no wonder he had closed off his heart so that he wouldn't have to go through that kind of pain ever again.

Although Honor doesn't magically change Dmitri back into the man he once was she does get to see a side to him that nobody else does and it was no wonder that she was unable to resist him. Honor is a guild hunter who went through a horrific experience when she was captured by a group of vampires and remained their prisoner for 2 months before the guild was able to track her down and rescue her. Her experience has left her wary of people and turned her into a shell of the hunter that she used to be. Thankfully guild director Sara is on hand to give her the kick that she needs and force her to face the world again but it is Dmitri who really helps build her confidence back up. He never treats her as if she is weak and breakable, although he understands that it would be easy to chase her away from him and he is careful in his seduction he respects her skill as a hunter and he is determined to give her her freedom by helping her track down the vampires responsible for what happened to her. The closure she gets from her revenge helps her move forward in her life. The chemistry between them was incredible from the first moment they meet but it takes time for Honor to trust both Dmitri and herself and give in to the connection she feels which made things much more believable considering everything she has been through.

I wasn't too sure what to make of events at the end of the book at first. I wasn't sure if I liked the way things played out (I know I'm being extremely vague here but I can't say too much without giving spoilers) and to begin with I felt a little disappointed. After taking some time to think about it I have to say that the ending made a lot of sense and I don't think the story would have worked as well if it had ended differently. My main reason for giving this story 4 stars rather than 5 was that for a lot of the time I felt more invested in Dmitri's past relationship with his wife Ingrede than I was in his current relationship with Honor. I know there were reasons for that and I was happy with the outcome but it was something that bothered me slightly while I was reading. Archangel's Blade is still a fabulous instalment to the Guild Hunter series though, it has everything I love about Nalini Singh's stories, a sexy dominant hero, a heroine strong enough to stand up to him when she needs to, hot sex scenes that will make you feel weak at the knees and plenty of appearances from some of our favourite Guild Hunter characters.