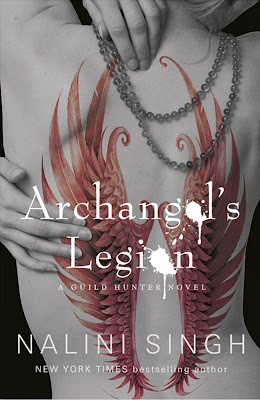 Angels are falling from the sky in New York, struck down by a vicious, unknown force.

Vampires are dying, impossibly, of disease.

Guild Hunter Elena Deveraux and the Archangel Raphael must discover the source of the wave of death before it engulfs their city and their people, leaving New York a ruin and Raphael's Tower under siege by enemy archangels.

Yet even as they fight desperately to save the city, an even darker force is stirring, its chill eyes trained on New York . . . and on Raphael. Rivers of crimson and nightmares given flesh, the world will never again be the same . . .

Review:
It's no secret that I've become a bit of a Nalini Singh fan girl since I discovered the Guild Hunter series, I'm slowly working my way through her Psy-Changeling books too and really enjoying them but Raphael and Elena will always have a special place in my heart. Because I'm such a huge fan I always have very high expectations when I pick up a new Nalini Singh book and I'm always slightly nervous that I've built the series up so much in my memory that it can't possibly live up to them. Thankfully NS never fails to not just meet but completely surpass my expectations though and with every single book she just makes me love her writing more.

It's been a while since we had a book where Raphael and Elena were the main players and as much as I've enjoyed getting to know some of the other characters in the series I was incredibly excited to go back to my favourites. I adore everything about this couple, the way they have changed and grown together throughout the series has been incredible to watch. They still have their issues but I love that they always put each other first, they are aware of their own insecurities and personal issues, they know each other's triggers and most importantly they are willing to put in the effort needed to make a success of their relationship. They don't always agree with each other but they talk things through and even Raphael has learnt to compromise in certain situations. Elena and Raphael are both so much stronger together than they ever could be apart and their relationship is incredibly swoon worthy. I honestly think I could read 100 different books about them and not get bored!

As if spending time with Raphael and Elena wasn't enough we also get some incredibly poignant moments between Illium and Aodhan, ones that will bring happy tears to your eyes and make you even more desperate to read their stories. I'm also incredibly curious about Naasir after getting to know a bit more about him. All of Raphael's seven have a major part to play in this one along with Elena's fellow Guild Hunters so we get to catch up with a lot of familiar faces - I have no idea how Nalini Singh manages to pack so much into her stories but she does it like an expert. There are some epic fight scenes that are described so well it's almost like watching a movie (boy would I love to see this series on the big screen!) and the action is pretty much non-stop throughout.

I really don't want to say much about the plot because I think you're much better off going in knowing as little as possible to make the most of the experience. What I will say is that Archangel's Legion is a completely and utterly addictive read, it will break your heart, it will make you laugh out loud, you'll be shocked, horrified, angry and upset one minute then ecstatically happy and swooning the next. One thing you won't be able to do is put the book down for a single second so clear your diary before you start reading! This book is a game changer in terms of the series, it opens up so many possibilities that I can't even guess at where Nalini Singh is planning on taking us next but I do know it'll be one hell of an adventure. I think I'd have to say that Archangel's Legion is now my favourite instalment of the series and that's saying something considering how much I've loved the previous books. I honestly can't recommend this series highly enough to paranormal romance and urban fantasy fans, it really is essential reading!