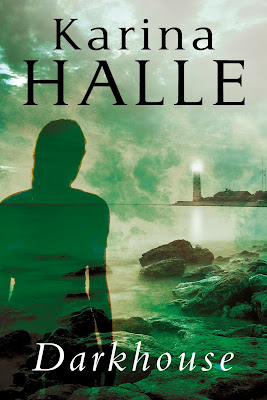 A supernatural journey with two unlikely ghost hunters who must battle not only spirits but their attraction to each other.

Perry Palomino is not what you would call ‘ordinary’. For one thing, there’s her past which she likes to pretend never happened, and then there’s the fact that she sees ghosts. Luckily for her, that all comes in handy when she stumbles across Dex Foray, an eccentric producer for an upcoming web­cast on ghost hunters. Even though the show’s budget is non-existent and Dex himself is a maddening enigma, Perry is instantly drawn into a world that both threatens her life and seduces her with a sense of importance.

Her uncle’s haunted light­house provides the perfect catalyst and backdrop for a horrific mystery that unravels the threads of Perry’s fragile sanity and causes her to fall for a man who, like the most dangerous of ghosts, may not be all that he seems.

Review:
When Perry decides to explore an old abandoned lighthouse on her uncle's property she gets a lot more than she bargained for. Not only is she convinced that there is something not right about the lighthouse, something that makes her skin crawl and leaves her scared for her life, but she also meets the mysterious Dex who is on the property filming for a new web show that he wants to create. When he offers Perry the chance to present the show she has to decide if she is ready to face something that she has spent so many years trying to suppress. Even though the idea terrifies her it also excites her, she is sick of her average life and wants to take a chance on something that could give her so much more.

I've been hearing great things about the Experiment in Terror series for a long time now but being a bit of a wimp the horror label has always put me off trying it. Then I discovered Karina Halle's totally addictive Artists trilogy and I loved it so much that I just had to give Darkhouse a try. I'm glad I took a chance because although the story was creepy it wasn't as scary as I expected it to be (although I have been assured that it gets scarier later on in the series which has me a little nervous LOL). What I loved about the story was how different it was to anything else I've read, most of the paranormal stories I come across are full of vampires and shapeshifters so finding a pair of human protagonists who set out to become ghost hunters was something new for me.

I loved the fact that Perry is just a normal girl, she isn't a stunner who has every man she meets falling at her feet, she has a normal job and in a lot of ways she's pretty much the average girl next door. At the same time she is smart, sassy and full of snark, she has her own sense of style and refuses to conform to what other people consider normal. She also has an unusual ability that allows her to see things that most people don't notice, this is something that she has spent years trying to suppress but that she isn't going to be able to ignore forever. I like the fact that Perry is brave enough to take a chance on following her dreams, when Dex asks her to present a new web show he wants to create she knows it is the kind of opportunity that will only come along once in her life and she jumps on board immediately. She isn't stupid enough to completely quit her day job though and that just made me respect her even more. Perry isn't perfect and there are times when I questioned her decisions but that just makes her all the more realistic and easier to relate to.

Dex is a trickier customer and I'm still not quite sure what to make of him. There is definitely some chemistry between him and Perry but at the moment I'm on the fence about him and sometimes I really struggled to see the appeal. There were times when I really didn't like how he treated Perry, it seemed like whenever she was scared out of her mind he would disappear on her leaving her to face whatever was frightening her on her own which irritated the heck out of me. As much as Dex annoyed me at times he could also be incredibly charming and I did enjoy the banter between him and Perry. After talking to a couple of friends about him I believe that he gets more irresistible as you get to know him better so I'm going to hold off on making a judgement about him. I'm hoping I'll fall just as hard as my friends have as I carry on reading the series. Whatever I feel about him now one thing I know is it's very hard to be indifferent to him, he is unlike any other hero I've come across, he's full of secrets and more than a little messed up but that just makes me more curious about him and I'm definitely interested in uncovering his full back story!

Darkhouse is an interesting start to the series, the first half moves at a fairly slow pace but is all about introducing the main characters and giving us a little information about their backgrounds. I appreciate the time the author has put into making them feel like real people and I'm really enjoying the set up for the storyline. The pace really picks up in the second half and that is where the creepy factor starts to kick in too so I can only imagine that things continue to ramp up from here onwards. I'm looking forward to spending more time with Perry and Dex in Red Fox very soon.

Source: Received from Piatkus Entice in exchange for an honest review