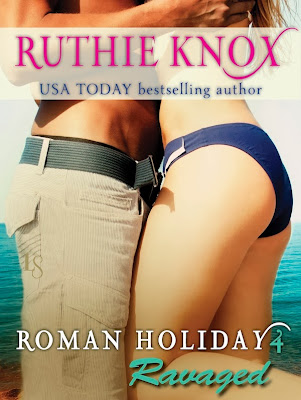 As the road trip up the Eastern Seaboard continues in Episode 4 of Ruthie Knox’s eBook original serial, Roman Holiday, sparks are flying—but Ashley and Roman are farther than ever from seeing eye-to-eye about what matters most.

Roman Díaz doesn’t do love. It hasn’t worked out for him. He could never survive trying to live with his heart wide open the way Ashley Bowman does. But it’s hard to keep his walls up around this woman. Every mile he spends in her power leaves him more ravaged by memories and emotions he can’t control—and drags him closer to succumbing to an attraction he can’t afford.

Review:
Ravaged is the fourth instalment in Ruthie Knox's Roman Holiday serialised novel and once again picks up the story immediately after the previous part ended. Ashley has found a way to blackmail Roman into taking a holiday with her, she has told him that if he gives her two weeks to change his mind about tearing down her grandmother's home she will accept whatever decision he makes at the end of their trip together. Her plan is to take him to visit the people who regularly spend their winters on the Keys, sure that her friends will be on her side and will show him just how important the complex is. But when Roman starts to explain the changes he wants to make she may just find that her plan is starting to backfire.

I've been really enjoying this serial, each instalment lets us get to know Ashley and Roman a little better and gives us more insight into their backgrounds and why they act the way they do. As much as I feel bad for Ashley that her home is about to be destroyed I have to admit that I felt uncomfortable with her actions towards Roman at times. I think in the beginning because he was so cold where she is so open and honest about her feelings it was easier to want to be on her side but as we start to see Roman open up and we learn more about his past it becomes harder and harder to accept the way she treats him. I don't think Ashley realises just how childish she can be at times but she does have a tendency to throw a tantrum when things aren't going her way. I can kind of understand where she is coming from though, she has just lost the only person who has always been there for her, she has also lost the home that she thought would always be hers and worse than anything her grandmother didn't tell her what she had planned so this has all come out of nowhere as far as she is concerned. That doesn't excuse her actions but it does show why she is so prepared to fight dirty to get what she wants.

I've come to like Roman more and more with every episode of the series and the things we discover about how he was brought up just broke my heart in this one. It is impossible not to feel for the lonely little boy he was and that makes it much easier to understand why he keeps his emotions locked up so tightly now as an adult. He never had anyone who cared for him and loved him as he should have been loved so now he doesn't believe that he ever will have that connection with anyone. The only way he has to prove his worth is by becoming a successful businessman and he is determined to be the best there is. All he wants is to prove himself to the people who always treated him like he was unworthy.

One of the things I loved about this instalment was the increased chemistry between them. I've said before that although they are opposites in a lot of ways I think they'll help balance each other out as they become closer. Roman is already starting to loosen up just a tiny bit and is questioning the way he lives his life and wondering if it is really as fulfilling as he always pretended it was while Ashley is being forced to face up to some home truths about the way she is treating Roman. I think Ashley still has a way to go before she accepts her grandmother's plans but I'm hoping she will start to realise that perhaps there was a reason for her actions. I can't wait to find out what happens next in Ignited!