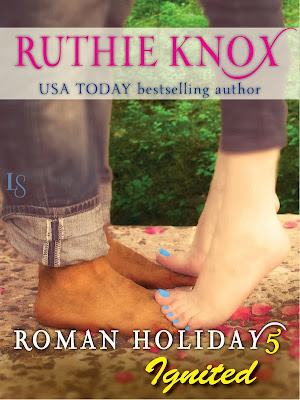 Review:
Ignite is the fifth instalment of the Roman Holiday series and the end of the first "season" so be warned you're now going to have to wait until March for the remaining five parts to be released. I have been really enjoying this series so I have no idea how I'm going to survive the long wait to see what happens next!

We get to see Roman and Ashley make a lot of progress in this part of the story, they are getting to know each other better and starting to understand what makes each other tick and why they act the way they do. To a certain extent learning about the other person is giving them both insight into their own lives and it's really interesting to see how this changes the way they see the themselves and the world around them.

Ashley can come across as quite selfish and uncaring at times but we see a more vulnerable side to her here, we get see the unloved young girl who is doubting everything now that she's found out about her grandmother's secrets. Her grandmother was the only person who cared about her and now she is starting to question that love she is more lost and alone than ever. Roman may hate the way she has gone about things but he is starting to see just how much her past has effected her. It was great to see them both start to open up to each other a bit more and I was also really pleased with the way Roman has handled things with Carmen. I respect him a lot because of the decisions he made in that direction and can't wait to see what the future will bring for him and Ashley.

I'm a huge fan of Ruthie Knox and this series is turning out to be just as good as her other novels. I'm excited to continue Ashley and Roman's journey with them in the next set of stories even though I do wish I could have them now rather than having to wait until March!