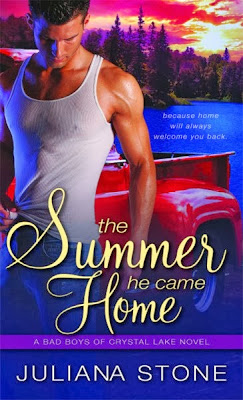 Sometimes the best place to find love is right back where you started...

Falling asleep in a different bed every night has made it easy for Cain Black to forget his past. It's been ten years since he packed his guitar and left Crystal Lake, Michigan, to chase his dreams. Now tragedy has forced him home again. And though Cain relishes the freedom of the road, one stolen moment with Maggie O'Rourke makes him wonder if he's missing out on something bigger than fame.

For Maggie—single mother and newly settled in Crystal Lake—love is a luxury she just can't afford. Sure, she appreciates the tall, dark and handsome looks of prodigal son Cain Black. But how long can she expect the notorious hellion to stay?

The last thing either of them wants is something complicated. But sometimes love has its own plans.

Bad Boys of Crystal Lake Series:
The Summer He Came Home
The Christmas He Loved Me
The Day He Kissed Her (2014)

Review:
Cain left Crystal Lake ten years ago to pursue his dreams of becoming a rock star and he hasn't been home since, in fact it takes the funeral of one of his best friends to get him back at all. Now he's here though he's starting to wonder why he left in the first place, especially when meeting Maggie and her son Michael makes him think about all the things missing from his life. Maggie moved to Crystal Lake to escape from her past so the last thing she wants or has time for is falling in love. She is focused on rebuilding her life for herself and her son but Cain is a distraction she can't ignore. Maggie knows his interest is only fleeting though, after all what does she have to offer a famous rock star?

I was already a fan of Juliana Stone for her Jaguar Warriors paranormal romance series but The Summer He Came Home has proved she writes contemporary romance just as well. If you love small town romances and the quirky town characters that come with them then you're sure to enjoy the Bad Boys of Crystal Lake series!

Cain was an easy guy to fall for, he may be a successful rock star but he's still quite a grounded character and he doesn't use his fame to get what he wants. He is drawn to Maggie from the moment he sets eyes on her but she pushes him away which only makes him want her more. Cain isn't used to having women turn him down so the challenge of winning Maggie around is something he can't resist. I loved the way he woos her, he is so romantic and goes out of his way to make things special for her but he also takes the time to bond with Michael and to make sure he has fun too. I do have a soft spot for men who are good with children and after everything Michael had been through it was so nice that Cain made him a priority alongside Maggie.

Maggie could be quite closed off emotionally at times but after everything she had been through it was easy to understand why she kept people at arms length. It was good to see her finally start to open up to her new friends and realise that she had support from other people in the town and not just Cain. She is a strong woman who has suffered a lot and become fiercely independent because of that. She works hard to make sure her son has everything he needs and she was a wonderful mother who always put Michael first. It was nice to see Cain help take some of the pressure off her though and I was pleased that they seemed to slot so well together as a family.

Their romance has some incredibly sweet moments and less angst than I was expecting considering her past. They have fantastic chemistry too so there are plenty of hot moments but it was the scenes where they were talking and having fun together that I enjoyed the most. I also loved both of the other Bad Boys and can't wait to read their stories. I think Jake's story will be particularly heartbreaking as he comes to terms with the death of his twin brother Jesse but I have a feeling Mac's book will be an emotional one too. I loved The Summer He Came Home so much that I'm going to start The Christmas He Came Home immediately because I can't wait to see how things play out for Jake and Raine.