Review: The Christmas He Loved Her - Juliana Stone 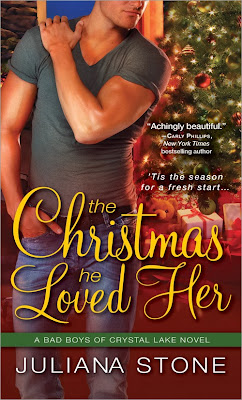 All he wants this Christmas is her.

In the small town of Crystal Lake, Christmas is a time for sledding, hot chocolate, and cozying up to the fire with those you love. For Jake Edwards, it’s also time to come home and face his past. He thought there would never be anything harder than losing his brother. Turns out there is: falling in love with his brother's widow, Raine.

Ever since they were little, Jesse was the Edwards brother who was always there for her, and Jake was the one who knew just how to push her buttons. Raine can't imagine a life without them, which is why it was doubly decimating when Jake left town after his brother’s sudden death. Now he’s back and she doesn't know whether to be mad or thrilled. Maybe both. Maybe it will be the perfect chance for both of them to finally find happiness again.

Bad Boys of Crystal Lake Series:
The Summer He Came Home
The Christmas He Loved Me
The Day He Kissed Her (2014)

Review:
I knew that Jake and Raine's story would be an emotional one considering their history but I don't think I'd anticipated exactly how gut wrenching it would be to read. I think that's one of the things I loved most about The Christmas He Loved Her though, Juliana Stone doesn't shy away from the pain that her characters are suffering and she pulls you into the story so you feel their emotions right alongside them. Although each book in this series features a different main couple I would recommend reading these books in order, we met both of these characters in The Summer He Came Home so already had an insight into their background that meant I was immediately invested in the outcome of their story.

Raine didn't just lose her husband Jesse when he was killed in Afghanistan, she also lost one of her best friends when Jake walked away and left her alone to deal with the consequences. She was going through the most difficult time in her life and she didn't really have anyone to lean on to help her through so as much as she's pleased Jake has come back she also has to work through her anger at him for leaving in the first place. In a lot of ways Raine's grief has broken her, she is a shell of the woman she used to be and has been living in limbo for the last year and a half, struggling just to make it through the days. It was hard to see how much pain she was in but I was glad to see her start to slowly pull herself back together. There is no doubt that Jake coming back gives her the kick she needs to start moving forward but she doesn't just do it for him, she realises that she has to make a change for herself more than anything and I think that was an important distinction to make.

It just about broke my heart reading from Jake's point of view, he had to deal with seeing his twin brother die in front of him and I don't think that is something you'd ever get over. He feels so guilty that he couldn't save his brother and bring him home to Raine but he's also angry that Jesse let himself get hurt in the first place. Jake is obviously suffering from PTSD and I thought that this was very realistically portrayed, the lack of sleep and nightmares are wearing him down but there isn't really anyone he feels comfortable talking to about it all. Another thing I liked was how the story shows the effect of Jesse's death on the whole family, his parents are just about coping but they're worried sick about Jake and scared that they're going to end up losing both of their sons. As if Jake wasn't messed up enough he also has guilt about his feelings for Raine, he has loved her since they were teenagers but it feels like a betrayal of Jesse to act on that, even if it does seem like she cares for him too.

This couple really does have so much going against them but it was fabulous to see them working through their issues both individually and together as a couple. I don't want to say too much more because I think it's a story you should savour for yourselves but it's definitely a book I'd highly recommend. We still have one remaining Bad Boy's story to go and I must say that The Day He Kissed Her is at the top of my 2014 wish list. I already love Mac's character and am looking forward to seeing him confront his past in what I suspect will be another emotional roller coaster of a book. I have to confess that I'm not too sure how I feel about Lily yet, I wasn't the biggest fan of her in this story but I think that there is a lot more depth to her than we've seen so far so I'm prepared to hold off on judging her for now. I'm sure if anyone can make me warm up to her character Juliana Stone can!