Review: Heating up the Holidays - Anthology 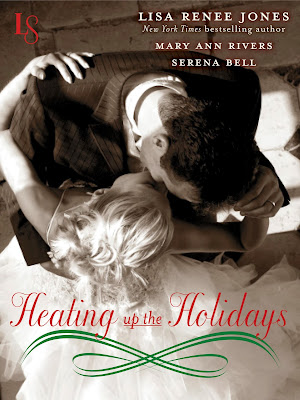 As leftover turkey and stuffing give way to stockings and little black dresses, this tantalizingly sexy eBook bundle offers up holiday-themed novellas from a trio of beloved romance authors. Lisa Renee Jones gives a dedicated reporter and a powerful businessman a chance to count their Thanksgiving blessings in Play with Me; Mary Ann Rivers presents Snowfall, the story of a woman who confronts a life-changing event—hopefully with a special man by her side—just in time for Christmas; and in Serena Bell’s After Midnight, an explosive New Year’s kiss leaves two strangers wondering whether they’ll ever see each other again.

PLAY WITH ME by Lisa Renee Jones

Kali Miller has spent three years reporting fluff stories, waiting for the article that will launch her career to new heights. When she suddenly finds herself forced to take a job as an executive secretary at a Vegas casino, Kali meets the subject of what will surely be a shocking exposé: her boss, Damion Ward, the arrogant and undeniably sexy CEO. But after Damion invites her to help him plan a Thanksgiving charity event, Kali begins to see another side of the man. And when she surrenders to the exhilarating tension simmering between them, Kali hopes her story will have a happy ending.

AFTER MIDNIGHT by Serena Bell

The clock is ticking down to midnight on New Year’s Eve, and all Nora Hart and Miles Shephard can think about is kissing each other—even though they met just minutes before. Then, as fast as Miles enters Nora’s life, he’s gone . . . and she never even gets the name of the man she thinks might just be “the one.” One year later, Nora and Miles are reunited. The chemistry between them is just as strong as they remember. But Miles broke her heart once before—and this time around, Nora’s not sure whether she can give love a second chance.

For more information about any of these authors you can visit their websites by clicking the links below:
Lisa Renee Jones
Mary Ann Rivers
Serena Bell

Review:
I've been devouring Christmas anthologies in the run up to the holidays so I was really looking forward to starting this one. Heating up the Holidays includes three stories all set around Thanksgiving, Christmas or New Years Eve which makes it perfect for this time of year. These novellas are all quite steamy so if you're looking for a naughty Christmas treat then I'm sure you'll enjoy this one.


Play With Me by Lisa Renee Jones

Kali has spent years following her dream to become a reporter, now she has moved across the country to take the next step in her career but the job she was supposed to start never materialises. She finds herself forced to take on the role of secretary to casino CEO Damion to make ends meet. It may not be the job she wanted but she is determined to do it to the best of her ability, she just needs to avoid acting on her attraction to her new boss.

Play With Me was my least favourite story in the anthology but even saying that it was still an enjoyable read. I think I would have preferred it if had been longer so Kali and Damion had been able to spend more time getting to know each other before jumping into bed together though. They have fantastic chemistry but I found it completely unbelievable that Kali would act on her attraction so quickly after the way Damion had treated her over one particular incident. Things did slow down a little between them after that though which made me enjoy the story more. My other disappointment was the lack of a holiday feel to the story, Thanksgiving is mentioned in passing but other than that this could have been set at any time of the year.

Jenny is going through a tough time, she moved away from home to start her dream job but she misses her family and friends, especially now that she has been diagnosed with a condition that means she is slowly losing her sight. Her deteriorating vision makes her nervous about going out and meeting new people but she has been chatting online with a guy called C who could possibly be becoming more than just a friend. The only person she can let her guard down around and share her fears and anger over her problems is her occupational therapist Evan. It is his job to help her finding ways of coping as her eyesight fades away but there is an intense connection between them that she is scared to pursue further. Jenny must make a choice between the two men in her life but which one should she pick?

Snowfall was the first story I've read by Mary Ann Rivers but if all of her books are as intense and hard hitting as this one then it won't be the last. I tend to expect Christmas stories to be fairly light and fluffy so I was surprised at how emotional this one was but I don't mean that as a negative. The author does a fantastic job of capturing how Jenny is feeling, she is scared, angry and hurting and she takes those negative emotions out on Evan because she doesn't want to worry her friends and family who live so far away. For a woman who is used to being independent she finds it really hard to think about what her loss of vision could take away from her but Evan works hard to prove that although things may change she can still live a happy and fulfilling life. This could have turned into quite a depressing story but it wasn't at all, yes there were darker moments but there was also plenty of humour to lighten things up. We are treated to some great cybersex scenes between Jenny & C but you also have the fabulous chemistry between her and Evan to look forward to. I think Jenny and Evan's first kiss was one of the best I've ever read about!


After Midnight by Serena Bell

When Nora and Miles meet at a New Years Eve party the last thing either of them is looking for is a relationship but they can't deny the chemistry between them and share an incredible kiss to celebrate the arrival of the new year. They don't keep in contact, in fact they never even found out each others names, but neither of them is able to forget their encounter. Nearly a year later they find each other again and the connection they feel is just as intense. Issues from both of their pasts make it hard for them to trust but sometimes love is worth taking a risk for.

After Midnight was without a doubt my favourite story in the anthology, it has all the feel good holiday magic I want at this time of year and I loved both of the main characters. Nora is so open and honest, she sees the good in people and in spite of the way her ex treated her she isn't afraid to go after what she wants. Miles used to be a happy go lucky kind of guy but with a huge problem hanging over his head he has become insular and closed off from those around him. He finds it much harder to put his past behind him but it was great to see him working through his issues. Things move quite quickly between the couple but because of the way the story is written it never felt like things were happening too fast. I didn't have any problems believing the way they were feeling and I loved the intensity of their interactions. It doesn't hurt that the story contains some of the hottest phone sex you'll ever come across and things get even better when they're finally in the same room together! I'm very much looking forward to reading more from Serena Bell in the future and I'm keeping my fingers crossed that she is going to write a spin off story about Miles's friend Owen.