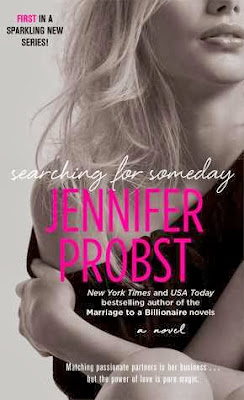 Kate has given up on love—at least for herself. She is both blessed and cursed with the ability to sense a romantic connection between two people—a gift that her family passed down for generations. When Kate launches her own matchmaking company, Kinnection, with her two best friends in a cozy New York town, she has to put aside her own romantic disasters to make her business a success.

But when a furious man stalks into her office and accuses her business of being a scam, Kate is given the ultimate challenge to prove herself. Slade puts himself in her hands and asks Kate to find him love. Enraged at his arrogance but stubbornly eager to prove herself, Kate agrees, dedicating herself to the journey of finding him love...only to find herself falling for him along the way.

Review:
Kate and her two best friends Kennedy and Arilyn have set up a matchmaking company called Kinnection wanting to use their special skills to help others find love. Kate has a gift and is able to sense the romantic connections between people by touching them so she is especially good at  matching couples together who will go on to have a happy and successful relationship. Unfortunately her abilities have never been much use on herself and she's always been unlucky in love. When Slade finds out his sister has joined a matchmaking company he is convinced that Kinnection is a scam and that Kate is just trying to con money from innocent victims. He is absolutely livid and as a lawyer he has the ability to make things very difficult for them so when he issues Kate a challenge she has no choice but to accept. If Kate can help Slade find love he will not just leave her business alone but actively help her promote it. The trouble is that Kate's ability seems to go haywire around Slade and she is far more attracted to him than she should be. Could it be that the cynic and the hopeless romantic might just be the perfect match?

I didn't realise that Searching for Someday is the first book in a new a spin off from Jennifer Probst's Marriage to a Billionaire series when I picked it up, in fact if I had then I probably wouldn't have read it because I haven't read any of her other books. However, I'm happy to say that apart from one family get together where I had trouble keeping track of who everyone was this easily works as a separate story. I think I would have appreciated that particular get together more if I'd known who everyone was but it didn't detract from my enjoyment of this book and if anything it's just made me more eager to go back and read her other series.

Kate is an immediately likeable character and I loved the interactions between her Kennedy and Arilyn, it's always nice to come across stories with strong and supportive female friendships so that was a definite plus point for me. Kate has spent so long looking for love that she's almost given up on ever finding it, she has a big heart though and longs for that someone special to share life with. If she can't find her own happy ever after she's going to put all her effort into helping other people find theirs so she has thrown herself into her new company with gusto. She just wants to make a success of things and there is no way she is going to let a cynic like Slade come along and ruin everything for her. How can she find love for the man who doesn't believe it exists though?

Years working as a divorce lawyer has convinced Slade that ever lasting love doesn't exist. The one person in the world he cares about is his younger sister and he will do anything to stop her being hurt - either financially by a sham company, or emotionally by some guy who will break her heart. If protecting her means going out on a few dates then he's happy to go along with that, it's not like he doesn't like women after all. What he isn't expecting is to be so drawn to the woman who runs the matchmaking service, Kate isn't like the women he usually meets and he finds himself incredibly attracted to her. They have fantastic chemistry from the beginning but it isn't going to be smooth running for this couple considering they are both pulling against each other.

I don't think I was expecting the amount of humour I got in Searching for Someday, this is a really sweet and romantic story that is full of giggles as well as plenty of heat. As much as I loved the main characters I also enjoyed getting to know the side players and I have a massive soft spot for Kate's dog Robert - he was utterly adorable and made me want to adopt him. This was such a fun read and I've definitely been missing out by not discovering this author sooner. Luckily I already have 4 of Jennifer Probst's other books on my to read pile and I can't wait to jump in and start reading them!