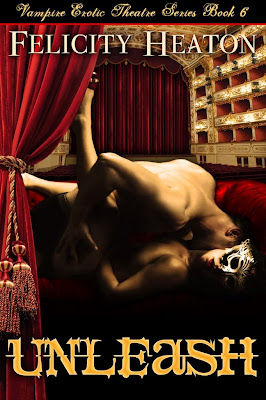 A powerful vampire lost deep in his bloodlust, Snow is a savage animal, mindless with rage and a thirst for violence, and trapped with no hope of awakening from an endless nightmare… until a song draws him up from the abyss, restoring his sanity but leaving him haunted by the sweet feminine scent of lilies and snow, and fragmented familiar lyrics.

When the mysterious and beautiful songstress reappears in Snow’s room at Vampirerotique, she awakens a fierce protective streak and stirs dark desires that drive him to claim her as his female, even when he knows his touch will destroy her innocence.

A single forbidden taste is all it takes to unleash emotions in Aurora that she shouldn't possess, tearing her between duty and desire, and luring her into surrendering to her wildfire passion and embracing hungers that burn so hotly they threaten to consume them both.

One act of kindness can lead to one thousand acts of sin though, each a black mark against the bearer’s soul and another grain of sand that slips through an hourglass. The clock is ticking and time is almost up. Can beauty save the beast?

Review:
I waited a long time for the final book in the Vampire Erotic Theatre series, Snow was one of my favourite characters from the very first book so I have been eagerly waiting for his story and to meet the woman who could bring him back from the edge of bloodlust. I was so invested in the outcome that I was actually nervous to read it though and I ended up putting off reading it for months after I had a copy because I was worried it wouldn't live up to my expectations. I should have known better though, Felicity Heaton has never let me down before and she didn't this time either, in fact Unleash is now my favourite instalment of the series!

Fans of the series have all seen how much Snow struggles with his bloodlust, how close he is to losing control forever and how worried his brother Antoine is about him. I loved the bond between the two brothers in Antoine's story (Seduce) and it was great to see more of their story through Snow's eyes in this one. They have a dark and tortured past and Snow has never forgiven himself for the things he did to Antoine and the rest of their family when the bloodlust had overtaken him. Snow doesn't believe he can be saved, he longs for death and the only thing keeping him alive is his promise to Antoine, he doesn't feel worthy of forgiveness and doesn't think that he will ever be able to gain full control of his dark side. Although the darkness is always close to the surface we have also seen evidence of a softer side to Snow, the way he is so protective when it comes to Antoine but also the way he interacts with the mates of his fellow theatre owners. Snow never sees the good in himself though and spends his time punishing himself for actions in the past.

What Snow doesn't realise is the effect his actions have had on others outside of his family though and he has completely forgotten meeting Aurora when they were both just children. Aurora has spent centuries watching over Snow from a distance and she has suffered for every single sin he has committed but in spite of that she sees the good in him and wants to give him the chance to save himself. It is completely forbidden for her to have direct contact with Snow but he needs the comfort she can offer him desperately and she has to do what she can to help him. It was her act of compassion when they were children that doomed him to a life of hell and although it cost her deeply too she still feels guilty about the part she played in his destruction. Now she has one final chance to make things right but if things go wrong it will cost them both everything.

I don't want to say too much more because I think you're best going into this book knowing as little as possible. What I will say is that I love Snow even more now than I did in the past which is saying something since he was always my favourite. I worried that no heroine would be good enough for him but Aurora is a fantastic match. She is strong enough to stand up to her man, willing to put her life on the line to fight for him and brave enough to risk it all for the things she loves the most. Unleash is a fabulous conclusion to the series and it was great to get a glimpse of the rest of the characters we've come to know and love and see how they have all become such a close knit family.