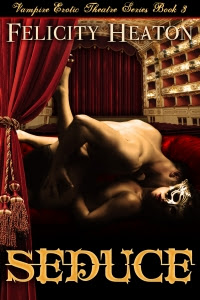 Bloodlust runs in his veins, a dark master waiting for the day it will reign over him. Now a woman with a pure soul and wicked intentions has him in her sights and is determined to crack the ice around his heart, and she might save or damn him.

Sera has wanted Antoine since the night she first saw the gorgeous aristocrat vampire. She can’t ignore the deep carnal hunger he stirs in her or the ache to know the heat of his touch. With the help of her sire, an ex-performer at Vampirerotique, she sets in motion a game of seduction, one designed to thaw the ice in Antoine’s veins and make him burn for her.

When Sera discovers the shocking truth about his past and the darkness that lurks within him, will she be strong enough to seize his heart with both hands and win him forever or will she lose him to the ghosts that still haunt him?

Review:
Seduce is the third story in Felicity Heaton's Vampire Erotic Theatre series and although the story works as a standalone I would recommend reading each of the stories in order starting with Covet. We have seen joint theatre owner Antoine in both previous stories but apart from the fact that he is an aristocrat and looks after his older brother Snow who is suffering from bloodlust we didn't know a great deal about him. He always seemed to be on the sidelines and as you find out more about his history you start to understand the demons that chase him and the reasons he keeps himself to himself. Although he is a loner he has a deep affection for his brother, their past has given them a bond that can't be broken and Antoine is determined to help Snow recover from his bloodlust.

Sera has lusted after Antoine from a distance ever since she first saw him, the more time she spends watching the aloof male the more intrigued she is and the more she wants to break through his hard outer shell and get to know the man inside. She sets out to seduce him but it isn't going to be easy to break down his defences and even if she manages it she may not like the secrets she finds. Antoine may find Sera attractive but he has been burnt before and has no intention of letting anyone close enough to hurt him again. He also fears that he will fall into the same darkness as Snow and worries about the possibility of hurting anyone around him. But Sera has a way of melting the ice surrounding his heart and he finds it impossible to push her away.

I have to admit I wasn't sure how much I'd like Antoine, it wasn't that I disliked what I'd seen of him so far - more that I didn't know him well enough to be excited about his story. I've been dying to learn more about Snow since I first read Covet though so if nothing else I was looking forward to finding out more about his past through his brother's eyes. I have to say Antoine surprised me and I loved him just as much, if not slightly more than Callum! Antoine is the ultimate brooding hero, someone with a dark past and who keeps his secrets close to his chest. He doesn't allow himself to let anyone close apart from his brother and although he has known Javier and Callum for a long time he has kept them at arms length. I absolutely loved the strength of the bond between Antoine and Snow, the brotherly connection between them means they always know when one is in need of the other. They are there for each other unconditionally and the love they have for each other shines through. I was pleased that Sera accepted that bond and made a point of getting to know Snow as she was falling for Antoine, she wanted to reassure him that she didn't intend to come between them and I really loved her for that. As I'd expected it was great to find out more about Snow's past, my heart broke for him and I can't wait to see his story. It is going to take a special kind of woman to help him heal his wounds (send him my way Felicity - I can handle him!!) and I can't wait to see how she does it.

I am thoroughly enjoying this series and can't wait to find out what happens next. I've already started Enslave and am very curious to get to know Andreu. If you haven't started this series yet then you don't know what you're missing - it's a must for paranormal romance fans, especially if you like scorching hot sex with a bit of an edge to it!