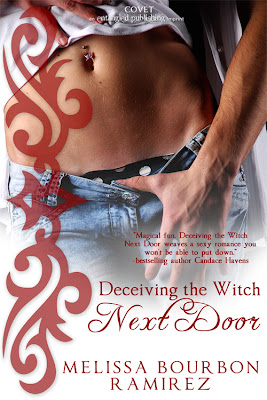 Storie Bell has a little secret—she’s a witch. But magic hasn’t exactly kept her life from being a complete mess—her love life is non-existent and the town thinks she’s a total nutter. Plus there’s her neighbour Reid Malone who runs hot one minute and cold the next.

Reid Malone can’t wait to escape Bloomington, Texas. Unfortunately, he’s stuck where he is unless he helps his father hide a very illegal secret. The only key to Reid’s freedom lies with the eccentric Storie…and he’ll do whatever it takes to get the information he needs from her.

But Reid’s holding something back. Something big. And if he’s not careful, he’ll find out exactly what happens when you try to deceive a witch...

Review:
Storie is a witch but her magic has brought her nothing but trouble, the whole town is wary of her but she is determined to prove to everyone that she is just a normal woman. All she wants is the chance to settle down somewhere and live a normal life and opening the Storiebook Cafe with her best friend is her chance to do just that. She wasn't banking on working next door to Reid though, her childhood crush that she hasn't seen since eight years ago but who has had a starring role in her fantasies since they made out the night before she left town. Reid was always desperate to leave Bloomington so when Storie returned she was expecting him to be long gone. Reid has been stuck in town helping to care for his sick father and has been roped into helping the old man achieve a life long dream before he dies. Unfortunately Reid needs to get hold of something that was hidden in Storie's new cafe but will helping his father lose him the woman who has haunted his dreams for as long as he can remember?

I really enjoyed Deceiving the Witch Next Door and although the story has a HEA I'm really hoping that it is going to be the first book in a series. There was definitely potential for supporting characters like Storie's best friend Harper to get their own book. I'd also be interested in learning more about people who cropped up from Storie's past. Even if this isn't the start of a series I'll be keeping an eye out for more from Melissa Bourbon Ramirez in the future and I would recommend this to anyone who is looking for a fun and light paranormal romance.

I really liked the way Storie was so determined to fulfil her dreams, she has always wanted a place to call home and is doing her best to make it happen. Her father always warned her that a relationship between a witch and a human man would never work so Storie has created her own alternative family with her best friend Harper and her two daughters. She loves Harper like a sister and thinks of her children has nieces and I really enjoyed the close relationship between them all. The girls were just adorable and added a nice extra to the story. After being abandoned by her mother as a baby Storie has never had anyone to help her learn how to use her magic, she has had to guess at things as she went along and this has caused problems when she nearly ended up giving herself away. Strange things often happen around her and that is why the people in town are so suspicious of her but Storie has never tried to use her magic to cause trouble. Opening the Storiebook Cafe - a bookshop come coffee shop that sounds like the kind of place I would love to spend time in - has been her dream for a long time and she is thrilled that it is finally happening but being around Reid and the sudden re-appearance of her mother might just knock her off track.

I did find myself irritated with Reid because of the way he was so dishonest with Storie, I felt that if he had just opened up and explained what he was looking for and why then she would probably have helped him and things would have been a lot easier between them. I guess that would have meant there wasn't much of a story though. They did have great chemistry and I enjoyed their banter and the constant arguments that were often followed by hot make out sessions! Reid has always been determined that small town life isn't what he wants but that is more down to the way his mother raised him than because he is actually unhappy living in Bloomington. When he realised that Storie was all he'd ever wanted he worked hard to prove he was worthy of her and I liked the way he accepted her so easily even after he found out that she was a witch. The fact that he was prepared to stand up for her when she needed him most was what won me over completely.

Deceiving the Witch Next Door was an enjoyable read and one I'm happy to recommend.