To celebrate the release of Foretold, the fourth and final book in the Demon Trappers series, I am thrilled to have Jana Oliver here today with a character profile of our favourite demon hunting hottie Denver Beck! Anyone who knows me will know that I'm a super fan girl when it comes to the Demon Trappers series - I adore the kick ass heroine Riley and had my heart completely stolen by Beck from the moment I first met him in Forsaken.

I can't tell you how excited I am to share Jana's character profile of Beck. Everyone who is already a fan of the series will be nodding along as they read agreeing with every word she says. If you haven't started reading the books yet then I'll be shocked if you don't fall a little in love with Beck anyway - just from his profile!

Before I share Jana's guest post I want to give you a little information about the book. I have already read Foretold (my review will be posted later today) and can tell you right now it was the best book in the series! I am sad to say goodbye to these characters but trust me - the series goes out with a bang and I'd much rather see things end on a high note. 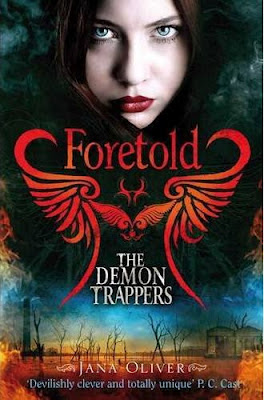 The end is most definitely nigh . . .

Riley Blackthorne has always known that fellow Demon Trapper Denver Beck had a chequered history, but she's not prepared for what it means to be in love with a guy with this many dark secrets. Now that he's finally admitted to himself that he's in love with her too, there's no more hiding the truth about his past. And as it turns out, fending off a demon apocalypse is nothing compared with what's to come . . .

When I first started writing the Demon Trappers Series, I had a young man in mind, one that was from Georgia and had a smooth Southern drawl. Beyond that, Denver Beck was a mystery. From the moment I wrote the first scene between Beck and Riley (outside the library in FORSAKEN) I knew he was going to be much more than a supporting character. There was something about him that intrigued me. I “looked” into his eyes and found wariness and a lot of personal pain. So I said to myself, “Let’s find out what he’s all about.”

Over the course of the series we’ve learned a number of things about Denver Beck. We know that he doesn’t read and write that well, that he rescued a rabbit rather than risk it being harmed when its owner was going to abandon it. We know he’s fearless, with the heart of a warrior. He’s also impetuous, mouthy, and isn’t that fond of authority figures. He’s “house proud” as he would say and been known to drink too much.

In short, he’s an all-American dude. He loves barbecue chicken, fresh corn on the cob and peach pie with ice cream. He’s fond of beer, pickup trucks and country music. He’s got Georgia’s red clay running through his veins and he’s proud of that. Though he’s won medals for valour during the war, he won’t talk about them.

I did get him to answer one question.

Jana: If you could have a perfect day, what would it be like?

Beck: Hmm… I’d go cruisin’ down to some lake. Doesn’t matter where, just as long as it’s got lots of fish. Then I’d listen to Taylor Swift and drown some worms. Might get lucky and catch my dinner, then I could stay longer.

Jana: All by yourself?

Beck: Well…if there was someone who might like to come along, I’d be good with that. But I don’t think she would.

Of course, the she is Riley. Paul’s Blackthorne daughter is one person who can shake up his life that frightens him. Part of him hopes they might have a future together and other part is sure he’s not worth it.

Beck is a troubled young man, brought up by an alcoholic parent who made his childhood total hell. He’s lost at love, watched friends die in the war and has a fierce desire to succeed. But that drive is hindered by the dark voice inside of his heart that tells him he’s not worth it. When coupled with events in his past, he knows he’s teetering on a knife’s edge, one step away from utter failure. We’ll learn if he earns that future in FORETOLD.

Denver Beck’s fortitude, his decency, his love for Riley, have all combined to make one of the best heroes I’ve ever written. It’s been my pleasure to tell the story of such an amazing man.

So was I right? Isn't Beck totally swoon worthy? Are you all even more in love with him than ever? I'd love to know what you think of the Demon Trappers series!
at 10:00