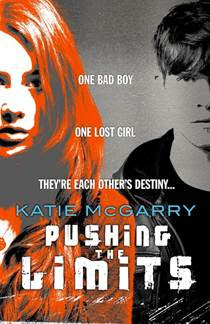 They say be a good girl, get good grades, be popular.

They know nothing about me.

I can't remember the night that changed my life. The night I went from the top of the pyramid to loner freak. And my family are determined to keep it that way.

They said therapy was supposed to help.

I know every kiss, every promise, every touch is forbidden.

But what if finding your destiny means breaking all the rules?

A brave and powerful novel about loss, change and growing up, but most of all love.

Review:
I don't read a lot of YA contemporary romance but I am a massive fan of Simone Elkeles' Perfect Chemistry series and so many of my friends recommended Pushing the Limits that I just had to give it a try. I'm so glad I did because it is without a doubt one of my favourite YA reads of the year so far. This is an impressive debut and one that has earned Katie McGarry a place on my auto-buy list of authors - I will be eagerly awaiting the sequel Dare You To when it is released next year.

The story is told from both Echo and Noah's points of view in alternating chapters which is a style that doesn't always work well but was extremely well written in this case. Both characters have distinctive voices so I was never left trying to figure out who the latest narrator was and I really enjoyed getting to know them both so well. Echo was always one of the popular crowd until an incident that left her hospitalised and meant she was off school for a month. Since she returned she has been like a different person, much quieter she is now someone who now keeps herself to herself and does everything she can to avoid attention. She doesn't remember the events of that terrible night but has been left with horrific scarring and now suffers from daily nightmares. Echo has become the source of much gossip and speculation amongst the other students and life couldn't be more different to what it used to be.

Forced into attending sessions with the new school counsellor the last thing Echo wants to do is talk but she is desperate to unlock the memories of the night her life was changed forever and nobody else seems willing to help her. It is through these sessions that she starts to get to know the school bad boy Noah. They have never really spoken in the past but now they both have a common goal and agree to work together to achieve it. As they get to know each other the attraction between them deepens and what starts as a tentative friendship soon becomes much more. But can they both deal with their very different issues in order to build some kind of future together?

It was so easy to relate to both Echo and Noah, they are both facing very different but equally heartbreaking problems. Echo suffered at the hands of someone close to her and her father and step-mother haven't been there to offer the support that she has needed. Noah on the other hand is in foster care after losing both of his parents in a tragic accident and he desperately wants to be reunited with his brothers. My heart went out to both of them and Noah's story in particular really effected me - I actually cried at one point reading about what had happened to him and I was so proud of him for the decisions he makes in the end.

Pushing the Limits is a beautiful coming of age story, it deals with so many different issues faced by teens today but at heart it's focus is the love story. The chemistry between Noah and Echo was fabulous and it was so easy to route for them as a couple. This book really is a must read for any YA contemporary romance fan - if you loved Perfect Chemistry then you'll enjoy this book just as much. I can't wait to read Beth's story in Dare You To and am looking forward to following Katie McGarry's writing career.